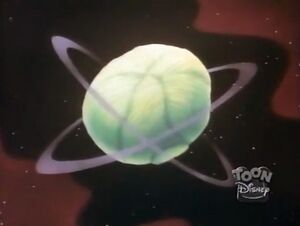 Zipton was a planet of fruits and vegetables. Nowadays it's a salad of debris.

Zipton used to be the home of a highly advanced civilization that either created their buildings from giant fruits and vegetables or shaped them after the food products. A bomb destroyed the entire planet, and only two babies from its population survived: Darkwing and Negaduck.

In a questionable retelling of the Darkwing Duck mythology, Negaduck's father wants to become the Grand Poobah of the World and threatens the Ziptonian council with a bomb capable of destroying the planet if his demand is not met. While the bomb is real, the threat is empty for reasons of self-preservation. Unfortunately, his brother tries to stop him and accidentally sits down on the detonator. Both men rush home, the first to ensure his own escape, the other to ensure his son's escape. Darkwing gets off the planet safely, but his uncle is beaten to the rocket by Negaduck. Both rockets are meant to reach Gribblefritz, but they bump into each other. Darkwing ends up on Earth while Negaduck is taken in and raised by space pirates. "The Secret Origins of Darkwing Duck"