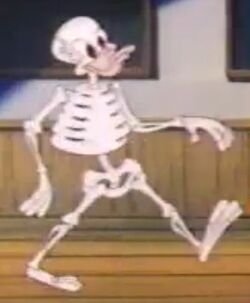 Yorick is presumably a staff member at the Eldritch Academy of Enchantment. He falls apart easily.

Yorick worked for Beelzebub when he came to capture Darkwing's soul, but whether that was voluntary or not is unclear. In the same vein, it is unclear if Yorick works at the Eldritch Academy of Enchantment or is a permanent servant of Beelzebub. If he does the former, odds are he's a janitor there because that would explain why Beelzebub could fill that role unbothered.

Yorick supposedly is someone who is quick to pick a fight.

Yorick is a tall duck skeleton who goes around without clothes.

After leaving the classroom angrily upon being mocked, Gosalyn bumps into Yorick. He loses his head, which stays with Gosalyn as his body stumbles on aimlessly. The head rolls around the corner of the corridor, luring Gosalyn along until she "accidentally" meets the janitor, who is actually Beelzebub. He claims to have been looking for Yorick all day, and assures her Yorick will be fine even without her help. Gosalyn keeps hold of the head anyway until Beelzebub lets her into the Library of Forbidden Spells. Hot Spells

Retrieved from "https://darkwingduck.fandom.com/wiki/Yorick?oldid=20689"
Community content is available under CC-BY-SA unless otherwise noted.