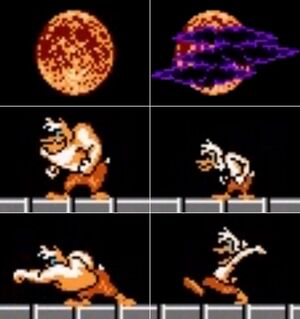 Not surprisingly, Wolfduck is a werewolf, or at least a creature who has the traits of one. He may or may not work for F.O.W.L., but either way he's not fond of Darkwing Duck. Wolfduck is not much of a fighter in his regular, non-moonlight-powered form, and if he has anything to offer besides the temporal and dependent brute strength of his werewolf form is, that's not something he has shown.

How Wolfduck became the way he is, whether he's a monster by birth or anything happened to him during his lifetime, is as nebulous as why he chose a life of crime. As werewolf, Wolfduck is dependent on the moon to access his supernatural strength. It is possible the moon needs to be full, but not confirmed. What is required is that he's directly exposed to moonlight or it might as well be daytime as far as his powers are concerned.

Wolfduck is a coward, relying on his stronger form to get him through a fight. If he's his regular self, all he does is run around flailing his arms.

Wearing only pants, Wolfduck is a scrawny man in his regular form, but under influence of moonlight his body gains height and muscle mass. He also grows a thicker bill with teeth in his stronger form.

Wolfduck becomes incarcerated in the new maximum security jail in St. Canard. Along with all other inmates, he is freed from his cell by Negaduck to hunt down a locked-in Darkwing. Orange Is the New Purple, Part 1

Wolfduck awaits Darkwing Duck on the roof of a skyscraper after the latter has made his way though the F.O.W.L. forces active in the city. With the full moon out, Wolfduck has access to his stronger form and jumps after or throws boxes at his opponent. The one flaw in his plan is that it's a cloudy night and every time the moonlight is blocked, he reverts to his regular form. Darkwing makes use of these moments to take him down. Darkwing Duck/Darkwing Duck

Retrieved from "https://darkwingduck.fandom.com/wiki/Wolfduck?oldid=24675"
Community content is available under CC-BY-SA unless otherwise noted.