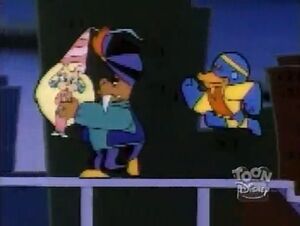 Whiffle Boy is an hugely beloved videogame series by Whiffle Boy Entertainment. There's at least four entries in the series, most of which star the titular Whiffle Boy as the protagonist. The creative genius behind it is Aloysius J. Mandelbaum, who also created the molecular digitizer and designed some of the tie-in merchandise.

Whiffle Boy was created by Aloysius J. Mandelbaum for Whiffle Boy Entertainment in the 16-bit era of videogames. Toy with Me The first known entry in the Whiffle Boy series features an unidentified protagonist. Their enemies include Dog Boy and Whiffle Boy, the latter being referred to as the "Colossal King". Whiffle Boy's mode of attack includes sitting on the protagonist's head, which apparently makes for an insta-kill. The game is available on home console to be controlled with a joystick and one level or mission includes contacting the moonbase. Battle of the Brainteasers

The second mentioned Whiffle Boy game features Whiffle Boy as the protagonist. The game is divided in at least four levels, of which the second is called Spider Attack and the final one is titled Ultima. For each playthough, Whiffle Boy has three lifes and gets to make use of a gun, a hammer, and bug spray. The main opponent in the game is the Weasel Kid, which chases the player across all but the final level and uses either an arm cannon or a crossbow. The enemies in Spider Attack are spiders that drop from the ceiling and are only sensitive to bug spray. The enemies on the third level are the Kung-Fu Gibbons. The Ultima level is foremost a maze the player has to get through while being chased by Daddy Weasel, Weasel Kid's huge mechasuit-wearing father. After the maze the player has to cross a railroad with a fast-moving train going over it and then win by getting to the middle of a lake guarded by Gator Gal. The game is narrated by a female voice whenever a level ends and one begins, and it is available on arcade cabinet and home console. The latter can be played with either joystick control or by a suit consisting of power gloves, power boots, and 5-D glasses.

At least by the time of the second game, Whiffle Boy is big: the popularity is referred to as the Whiffle Mania. Whiffle Boy Entertainment had a town of its own, Whiffle Town, for its staff to work at and to receive guests. One financial benefit Whiffle Boy Entertainment had was Mandelbaum's creation of the molecular digitizer, a device that allows any object to be digitalized, which saves on programming costs. Quackerjack Toys, owned by Quackerjack, received stiff competition from Whiffle Boy, both by losing customers to videogames in general and losing an audience for physical toys to the merchandizing tie-ins. The company did not have the money to advertize itself to rise above it and went bankrupt. Quackerjack snapped from the loss and became a dangerous felon with a hatred for videogames and Whiffle Boy in particular. Whiffle While You Work

The third game brought up is Son of Whiffle World. Its protagonist once more is Whiffle Boy, who has to save the Princess from the Walrus Boy. Enemies include Anvil Bats, Slime Squids, Exploding Roller Chickens, and Goblins. The player has to dodge these or jump on them to destroy them and make their way to the top of the building, then follow this up with a pursuit of the Walrus Boy as he takes off with the Princess. The Frequency Fiends

After this, huge changes took place at Whiffle Boy Entertainment. The momentum of Whiffle Boy kept improving by an increasing rapidity of innovation, but at the cost of Mandelbaum's ability to keep up. He also didn't like the direction the franchise was going, like how the game World of Whifflecraft, an MMORPG set in Whiffle World with about 12 million subscribers, undid Whiffle Boy as a character and allows everyone to be him in one game setting. No matter his history with the company, he was let go, a fact that hurt him deeply. He got to take the molecular digitizer, which was no longer in use, with him. Vulnerable and in possession of what potentially is a highly dangerous weapon, Quackerjack sought him out, falsely befriended him, and had him adjust the device to be able to turn people into toys. Out of revenge, Quackerjack blasted him first and then took the molecular digitizer to the Whiffle Boy Entertainment offices in what by then had become Whiffle City. His plan was to attach the molecular digitizer to the servers and hit everyone playing it at once, but Darkwing Duck, who had obtained and recognized the Mandelbaum doll, stopped him and found that Mandelbaum fortunately had installed a reverse function on his creation. Toy with Me

Drake Mallard is playing the first Whiffle Boy game when Gosalyn and Honker, the latter under control of Flarg, come into the living room. The Brainteasers mistake Drake's talk about the videogame, how Whiffle Boy will sit on people's heads and that there is a moonbase, for things that are real. Barada takes control of Drake to get access to more of this data. Battle of the Brainteasers Drake and Gosalyn are competitors in the semifinals of the Whiffle Boy Videogame Competition. Gosalyn does well, but Drake's attempt is sabotaged by Quackerjack, who is out to destroy all of Whiffle Boy. Drake changes into Darkwing to fight him, but Quackerjack gets away. Nonetheless, the presentators, Pat and Pat, are intrigued by the opportunity they have here and invite Darkwing to the finals as Gosalyn's opponent to garner publicity. Darkwing eagerly agrees and he and Gosalyn are flown to Whiffle Town for the finals. They get a tour around the place and are given rooms with Whiffle Boy setup to train during the evening. Darkwing discovers that Gosalyn has power gloves, power boots, and 5-D glasses to improve her game skills, and after bribing doesn't work, he steals them from her. Gosalyn doesn't realize this until she finds her father wearing her stuff during the finals. The presentators keep them apart, but then Quackerjack comes in and attacks the four with his toys. Gosalyn and Darkwing fight back, but Darkwing and Quackerjack get caught by the molecular digitizer's ray and transported into the Whiffle Boy landscape. Quackerjack takes it particularly badly, until he sees the Weasel Kid go after Darkwing and disintegrate Whiffle Boy. He befriends Weasel Kid on the spot and enjoys their chase of Darkwing. Meanwhile, in the real world there's nothing that can be done for Darkwing or Quackerjack; if they want out, they have to use the gate in the Ultima level. Knowing her dad never made it that far, Gosalyn takes control of Whiffle Boy to help him along. With Whiffle Boy's help, the Spider Attack level is a breeze. Darkwing takes care of the Kung-Fu Gibbons of the next level, but Whiffle Boy loses his second life to Quackerjack's Mr. Banana Brain. Darkwing and Whiffle Boy reunite in the Ultima level, but its main danger and Quackerjack's latest friend, Daddy Weasel, makes the reunion a short one. Darkwing flees until he gets on the railroad and pretends to have hurt his leg. Daddy Weasel follows and Darkwing jumps out of the way just as the train comes in. Darkwing and Quackerjack make their way to the gate at the end of the level, which is guarded by Gator Gal. Darkwing jumps over her, escaping, but Quackerjack is eaten for the time being. Darkwing and Gosalyn get to share the title of champion for their teamwork. Whiffle While You Work

When Darkwing is audibly upset, Launchpad wrongly guesses it's because he lost another game of Whiffle Boy. Stressed to Kill Gosalyn gets hit by the latest weapon SHUSH has sent Darkwing. This creates three new beings — Heatwave, Lightwave, and Radiowave — who are extrapolations of her worst traits and share her interests. Due to Darkwing's incompetence, they fuse into a super-charged three-headed behemoth. The only way to destroy them is to trick them to the power company outside of town and hit them with a blast of negatively polarized energy from the magnet gun set up there. Gosalyn turns the entire plant into a Son of Whiffle World stage and assigns the roles of the Princess, Walrus Boy, and Whiffle Boy to herself, Launchpad, and Darkwing respectively. Megavolt is sent out to notify the frequency fiends of the construction and is in charge of zapping them when they are near. The frequency fiends fall for the charade until Megavolt takes too long to activate the magnet gun and they start noticing that the controls don't work and that Whiffle Boy is a little pudgy. When they realize they've been tricked, they entertain themselves by creating Son of Whiffle World enemies for Darkwing to defeat until they are bored and decide to destroy him and Gosalyn. Megavoly finally activates the magnet gun before they can. The Frequency Fiends

Mandelbaum gets a visit from Jack, who wants to ask about the old days of Whiffle Boy. Mandelbaum is delighted to have an opportunity to talk about his heydays. On Jack's advice, he gets out the molecular digitizer he's held on to and makes a few adjustments so that rather than digitizing objects, it now turns them into toys. Once he's done, Jack giddily reveals himself to be Quackerjack and toyifies Mandelbaum first, then takes off with his new weapon to the offices of Whiffle Boy Entertainment. He smuggles himself and the deivce inside in a crate disguised as a gift from a fan. When he jumps into action, he turns two employees into toys to make a point and keeps the rest hostage in return for the servers. He means to hook up the molecular digitizer to the servers and toyify anyone playing at that time at once. As Quackerjack's waiting for the servers to be brought to him, word of odd happenings at Whiffle Boy Entertainment reach the userbase and warnings to go offline start circulating. This clues in Darkwing as to the villain's whereabouts and general plan, so Launchpad flies him to Whiffle City to deal with the threat. Darkwing is successful, saving potentially millions of people, and finds that there's a reverse ray on the molecular digitizer to cure everyone already hit. Launchpad looks forward to de-toyifing Mandelbaum because he wants to tell him how much he adores Whiffle Boy. Toy with Me

Retrieved from "https://darkwingduck.fandom.com/wiki/Whiffle_Boy?oldid=19417"
Community content is available under CC-BY-SA unless otherwise noted.