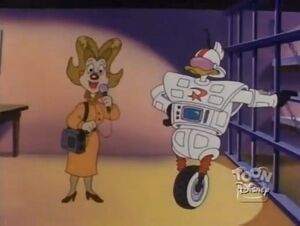 If you watch the news, you might have spotted a woman with a remarkable M-shaped haircut. This woman is Webra Walters, an ace journalist to whom the truth and justice are the foremost concern of her job. She sees right through deception and mudslinging and does not hesitate to call it out in person or on her program. Her sense for what's right extends to dealing with supervillains, whom she might be afraid of but not intimidated enough by to just go along with their demands.

She is voiced by a different voice actor each appearance. Her "Up, Up and Awry" voice is Tress MacNeille and the other two are unknown.

Webra Walters is a familiar face on television both in Duckburg and in St. Canard as she provides the content for and hosts her own news segment. Unlike many of her colleagues, she doesn't do drama for better ratings and works from an angle of moral standards. A hero is only a hero to her if they're honest about their own accomplishments and those of others. The Quiverwing Quack Whether an inborn quality or a result of her time around heroes and crooks, Walters doesn't shy away from standing her ground in front of powerful villains either. Paint Misbehavin'

When Walters admires someone, she isn't stingy on the compliments. Up, Up and Awry The other side of the coin is that a few wrong words are enough to cancel out that admiration. She isn't hesitant in the slightest to give an arrogant bighead a piece of her mind and share that piece wih the viewers at home. The Quiverwing Quack That isn't to say she needs the public as her weapon; she sticks to her principles in private too even when that means putting herself in danger. Paint Misbehavin'

The first thing anyone notices about Webra Walters is her iconic hairdo, which sees her blonde hair done up high in something that resembles the letter "M" or perhaps more accurately a "W" upside down, just more round. She matches it with orange jewelry and dresses.

After Gizmoduck defeats Megavolt, Webra Walters interviews him. Up, Up and Awry Walters is one of the first reporters present when Quiverwing Quack and Arrow Kid defeat Negaduck at the St. Canard Museum. Darkwing Duck tries to take the glory from them, to which Walters calls him out on camera. She later makes an energetic report on the new hero in town. The Quiverwing Quack Serving as celebrity hostess of the Motel Art Auction, Walters is the only one not to run from Splatter Phoenix's painted pets. While she can't stop the villain from repainting the art for sale, she does refuse to hand over the profits of the evening. Splatter Phoenix sics her creations on the woman, but they attack their master instead. This is when Walters decides to make her escape. Paint Misbehavin'

Walters has Constance Dention on her news program to talk about her views on Darkwing Duck as mayoral candidate. Dention, herself a candidate too, voices strong opinions that Darkwing can't be both hero and mayor and that even as hero alone he is the questionable sort. Walters defends him, pointing out he's the only one who has proven themself to be capable of taking down certain criminal elements, but Dention counters that it might just be his headline-grabbing business that draws out that element in the first place. Campaign Carnage, Part 2

Retrieved from "https://darkwingduck.fandom.com/wiki/Webra_Walters?oldid=25939"
Community content is available under CC-BY-SA unless otherwise noted.