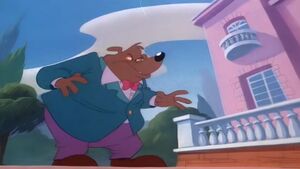 Once a regular Quackerware salesman, Weasel Loman turned to a life of Quackerware-themed crime when the salesman part didn't work out. He has it particularly out for his once-colleague Herb Muddlefoot, who is unconditionally loyal to the brand and an ace salesman. Or in other words, everything that Weasel Loman is not. Although he lacks Herb's salesman talent, Loman is able to mimic his rival in all other ways and uses this to pin the blame of his crimes on Herb. Loman has developed a machine that grants legs and a level of sentience to Quackerware products and to serve as his minions. Through a Trojan Horse setup, he has them steal money and small valuables from people's houses.

He is voiced by Brian Cummings.

Prior to becoming a jewel thief, Weasel Loman was a Quackerware salesman. It isn't entirely clear why he was let go. Loman was told he didn't understand Quackerware, but he did make an effort insofar that he tried to become the apprentice of Herb Muddlefoot. He was rejected, which suggests some form of dishonesty during the job rather than incompetence because Herb is passionate about spreading the teachings of Quackerware and even gave Thug Neanderthal a chance. The rejection, coupled with Herb's rising star, gave Loman a grudge for life.

Whether during his days working for the Quackerware Corporation or afterwards, Loman started work on a machine that turns Quackerware products into his robotic slaves. The plastic containers gain legs, a capacity to even hold people, and enough intelligence to follow orders. They are fully loyal to Loman and make a repetitive noise that sounds like "Herb Herb Herb". Knowing a thing or two about Herb Muddlefoot, having use for the access his fame as salesman of the decade brings, and wanting revenge, Loman dressed up as his rival and went door to door selling mutated Quackerware products to ransack the customers' homes, steal their valuable belongings, and bring the loot to him. His full plan contained multiple fases, the first targeting regular people's homes and the second aiming for the possessions of rich people. There was a fase 3, but he was arrested by SHUSH before he got around to that.

Weasel Loman is someone trying to reinvent themself after failure and using revenge as their inspiration. He regularly boasts to himself that his ideas for Quackerware are better than those of the Quackerware Corporation itself and favorably compares his own take on door-to-door salesmanship to Herb Muddlefoot's. Loman cannot stand Herb for his goody two shoes comportment and perpetual dedication to the company, but also possesses a layer far underneath of hurt over being rejected as his apprentice in the past. Because of this, he experiences jealousy when he sees Herb training another, even though he's no longer part of the official Quackerware scene. Loman's complicated relation to the salesman of the decade further manifests in the pride he takes in his ability to impersonate Herb enough that it required them to stand next to each other for people to realize the imitation. For the Quackerware Corporation itself Loman only has disdain left, while the Quackerware line-up remains on his good side only because he can mutate it into his own army. As a villain, Loman is still inexperienced. He can set up a good plan, but his improvisation capacity is limited. He can't really fight and will sooner run than resolve. He doesn't think of rogue elements that get in his way as a problem when he's not immediately affected by them, which is an open goal to anyone who is more persistent than he is naive.

Weasel Loman is a weasel with a medium-to-tall round body shape identical to the one of Herb Muddlefoot, which made it easy for him to disguise himself as the other. As part of his disguise, he goes dressed in a Quackerware Corporation uniform.

With an abandoned factory of sorts as hideout, a machine that turns Quackerware products into his thieving assistants, a yellow minivan, and a Herb Muddlefoot mask, Weasel Loman travels across the country to steal jewelry and other valuables. He pretends to be a Quackerware salesman, but the products he sells are mobile and trained. Once inside, they seek out loot and return with it either to Loman or his hideout. Loman's made a fortune by the time SHUSH gets involved and that's only during Fase 1 of his bigger scheme. SHUSH selects Darkwing Duck for the case, but when he learns the suspect is Herb Muddlefoot, he refuses and the case is given to Gryzlikoff. As Drake Mallard, Darkwing becomes Herb's apprentice to protect him. Loman spots them on Herb's route and becomes jealous. He tricks Herb out of the way by giving him a call pretending to be an unsatisfied customer and sending him to an address way in the desert. With Herb gone, he steals the Quackerware supplies from Drake and returns to his hideout to bring them to life. For Fase 2, he paints them golden so they'll be bought by rich people. Drake finds him again in a rich neighborhood when he's about to make his first sale there. Loman plays along and gets Drake out of the way to collect the loot from his minions. His plan falls apart when Herb Muddlefoot shows up in search of Drake. When he sees the golden Quackerware items, knowing they aren't official products, he attacks his lookalike and unmasks him. Herb recognizes his former colleague and after Loman insults Quackerware, the two start trading fists. To make matters even more complex, Gryzlikoff shows up, so Drake gets into his Darkwing costume to deal with him. Loman flees in his car when he sees the two SHUSH agents and Gryzlikoff realizes Herb is indeed innocent. They go after him, but Gryzlikoff gets lost along the way and Loman thinks he got rid of Darkwing too when actually he's hiding in the back of the minivan. Loman returns to his hideout where his minions are already gathering to stash the loot. Pleased, Loman considers initiating Fase 3 if he can get his hands on more Quackerware products. Darkwing reveals his presence, but fails to arrest him because Herb, having followed the line of mutated Quackerware supplies, shows up just when Loman can use a hostage. He takes the key to the Quackerware Plant from Herb, locks him up within bowl-based minion, and sics the rest on Darkwing while he goes to replenish his minion material. He's in for a rotten surprise when both Herb and Darkwing show up at the factory and attack him. Defeated, Loman is thrown into a packaging machine for Gryzlikoff to have an easy arrest when he too arrives seconds later. "The Merchant of Menace"