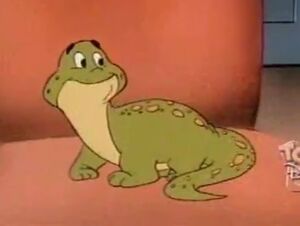 Wayne is a small, laidback reptile in the possession of SHUSH or Sara Bellum specifically.

Wayne presumably was purchased as a test animal and fulfilled that purpose when Sara Bellum needed a test subject for her norma ray. Despite being told not to think, he did and exploded when exposed to the norma ray. He imploded back into existence about half an hour later in seemingly good health and a good mood. Whether he gained any powers from his short time being blasted is unknown.

Wayne is a good-natured reptile whose chances of survival could do with a little less trust.

Wayne is a small reptile of indeterminate species. His skin is green with yellow spots.

After a failed first test with Launchpad McQuack, Sara Bellum proceeds to try the norma ray again, this time on Wayne. He is instructed not to think during the procedure, but does so anyway and as a consequence his head explodes. Afterwards, Bellum is tricked into giving F.O.W.L. agents psychic powers and needs to be saved by Launchpad and Darkwing. Bellum and Darkwing are removed from the scene and as Launchpad stands alone post-battle, Wayne poofs back into existence among the items Launchpad has unwillingly circle his head. As Wayne grabs a snack floating nearby, Launchpad brings him along to Darkwing Tower. Heavy Mental

Retrieved from "https://darkwingduck.fandom.com/wiki/Wayne?oldid=21698"
Community content is available under CC-BY-SA unless otherwise noted.