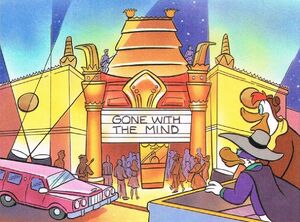 The Watson Theater is one of the various movie theaters in St. Canard.

The Watson Theater is a grand and luxurious movie theater.

Frequencia pridefully leaves a note at Rockefeather Mansion that the next place her gang will rob is the Watson Theater during the premiere of Gone with the Mind. Darkwing finds it and informs the police of the threat before he and Launchpad go on a stakeout. They hide in a box seat to look for anything suspicious among the audience, but the only thing of note are three ushers who push a food table onto the stage area. Darkwing doesn't realize they are what he was staking out for until they throw off their uniforms and the table cloth. The leader introduces herself as Frequencia and explains that this is a stick-up. Darkwing swings off the balcony to catch them, but the machine under the table cloth is activated. A loud, piercing screech fills the theater, fritzing everyone's minds but for the crooks', because they are wearing earmuffs. The three leisurely collect their loot from the audience and run off, but not before leaving another taunting note that the Gold Reserve is next. The audience and heroes don't awaken until several hours later, when the villains are long gone. "High Wave Robbery"