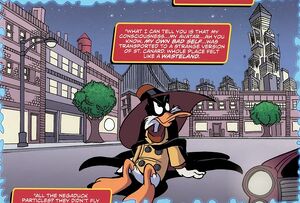 The wasteland is a mirror dimension where living beings do not naturally exist, but all they create does. It is essentially a ghost dimension.

The wasteland is a dimension where nothing lives. It does, however, somehow produce artifacts from living beings and is as equipped to sustain life as the other dimensions. It appears to have an osmotic quality in that creatures who disappear due to preternatural causes end up there in one shape or another.

Being hit by the tronsplitter time and time again until his body is nothing more than a collection of particles, Negaduck's sense of self becomes de-anchored and is sent to the wasteland. "Crisis on Infinite Darkwings, Part 4"-"Dangerous Currency, Part 4" He is later joined by Morgana Macawber, who got lost in a fight with Duckthulhu. "F.O.W.L. Disposition, Part 4"-"Dangerous Currency, Part 4" Negaduck and Morgana cooperate on an investigation as to how to get home and discover that it is possible to create a portal from the remains of Negaduck's body, making Morgana dependent on the influence Negaduck still has on her home dimension. At the same time, they need to be invited by someone from that dimension, which will free them simultaneously. No one would ever invite him back, but there who would Morgana, making him just as much dependent on her. After months of waiting and seeing the remains of his body utilized in a scheme by various villains, Negaduck gets a chance to show himself to Darkwing Duck when Gyro Gearloose and Honker Muddlefoot create the desired portal. The situation is explained to Darkwing and his choice is to save Morgana and deal with the consequence of Negaduck's return the old-fashioned way. Morgana, however, made her preparations. She put a spell on Negaduck that is to be activated with "the truth" and will send him straight back to the wasteland. Darkwing accomplishes telling Negaduck "the truth", conveniently after the villain has retaken possession of his body and fused with the Phantom Blot, the Beagle Boys, and the League of Eve-il. This gets all eleven of them a one-way ticket to the wasteland. "Dangerous Currency, Part 4"