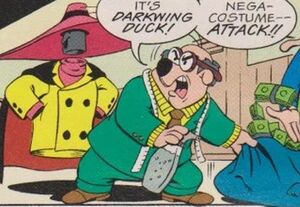 The villain costume designer is the one all of the top criminals of St. Canard go to for a defining outfit and replacements in case a scheme backfires in such a way that those are needed. As a quality tailor catering to a unique market segment, the only thing that holds him back is the fact he's still dealing with criminals. He earns what they are willing to pay rather than what is fair compensation for his labor. The frustration over this eventually drove him into illegal activity himself to obtain the missing money from the banks of St. Canard.

Given that Darkwing Duck had no idea who the villain costume designer was before he started robbing banks, the designer appears to have performed his job within the limits of the law. As per his own words, all the villains in St. Canard come to him for their costumes and his clientele is confirmed to include Ammonia Pine, Steelbeak, and the Eggmen, which altogether suggests F.O.W.L. as a whole makes use of the designer's services, Tuskerninni, the penguins, Negaduck, Megavolt, and Quackerjack.

The problem with criminals as customers, however, is that they're criminals. Despite being a rare provider of villain costumes and good at it, his customers prefer to enforce their own prices, which are significantly lower that the ones he sets. For a long time, the designer allowed this to be the situation. When he decided to take matters into his own hands, he used his understanding of chemicals in relation to fabric to create a super-starch. The super-starch has the ability to grant mobility and sapience to clothes, which he used to create himself a loyal army with that possesses the equipment and possibly some of the personality of their intended owners. The designer led them into St. Canard where they caused panic and confusion so he could rob banks more easily, but Darkwing soon stopped him. What this meant for his career is unknown.

The villain costume designer performs his work with dedication and diligence, and so his clients' refusal to respect his prices not only affects his wallet but his pride too. As he puts it, he developed the super-starch so that "the costumes can stand up for themselves and their creator". He is easily angered when he does not receive credit for his work or when the outfits' quality is not recognized. His anger mostly manifests in condescendingly talking to and about people who don't share his views, as he has neither the physique nor willingness to fight anyone over them. In the role of criminal, his main problem is relying on the combined tactics of others rather than having one of his own, which makes him predictable.

The villain costume designer is a short, pudgy dog. He is balding, but has some grey hair left of the side. He wears glasses and a green suit over a yellow sweater and brown tie. His shoes are brown too and a tape measure hangs over his neck.

After missing out on years of proper payment from his customers, the villain costume designer decides to take matters into his own hands. Turning to chemistry, he develops a super-starch that when sprayed on clothes makes them mobile and sapient. With this, the designer creates his own army of villain costumes. He sends most of them out into the streets of St. Canard to wreck havoc as a diversion that has the added benefit of framing the criminals whom they are associated with. The designer, meanwhile, goes out to rob banks. Darkwing Duck, however, catches up with him as he searches for the costume belonging to Negaduck, which is assisting the designer. The designer sics the costume on the crimefighter, but he is armed with fabric softener that makes short work of the costume. Launchpad McQuack confiscates the super-starch and Darkwing interrogates the designer, who takes offense at the hero's suggestion he's using "cheap imitation costumes" instead of his original work. After he explains who he is and what his motives are, Darkwing hands him over to the police to be brought to jail. "Vogue's Gallery"