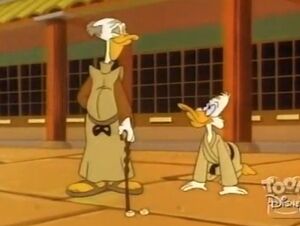 The Venerable One, Vinny to friends, is an old and blind monk who guides a monastery in Asia. He has no patience for nonsense, arrogance, and freeloaders and will thwack anyone that annoys or disappoints him with his walking cane. Being on his good side is a lot more pleasant, as he has a lot of wisdom and combat techniques to share.

He is voiced by René Auberjonois.

The Venerable One is an old man who seems to have spent most of his life if not all in the monastery. In his old age he is the respected leader of the community and the one who decided to take in an alien baby. He also is the one who named him Stinky and the one who told him to leave in his young adult years. Stinky has a high opinion of him.

Having lived for a long time, the Venerable One is past the subtle approach and undeserved patience. If it bothers him and can be resolved by hitting it with his cane, he will. He does not tolerate arrogance and will deal with it in a manner that teaches the owner a lesson. Because he wastes no time on entertaining nonsense, he has the energy to be generous and patient where it actually might make a difference.

The Venerable One is a tall duck with white feathers and although he's balding, he's got some grey hair left. He is blind and with his age needs to go around with a walking cane. He dresses in the standard robe of the monastery.

In a questionable retelling of the Darkwing Duck mythology, an alien space pod crash lands in the monastery. The Venerable One is the first to discover its contents: an alien baby. He announces that they'll take him in and teach him their ways. The child is given the name Stinky, because his diapers need to be changed at the time of his arrival. In the next two decades or so, Stinky is taught to find inner peace, respect all living things, and martial arts. He never does manage to fully fit in, so after those years, the Venerable One advises Stinky to leave and find a fitting hom. The Secret Origins of Darkwing Duck

Retrieved from "https://darkwingduck.fandom.com/wiki/Venerable_One?oldid=20691"
Community content is available under CC-BY-SA unless otherwise noted.