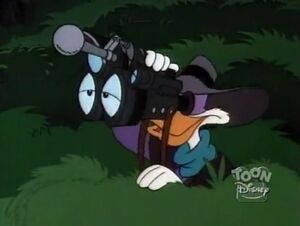 The ultraviolet binoculars were among Darkwing's gadgets until Derek Blunt destroyed them.

After having already almost killed his mission colleagues and betrayed their location, Darkwing is forbidden to use any more gadgets without Derek Blunt's permission. He ignores the spy and whips out the ultraviolet binoculars. Blunt grabs them and dumps them along with most of Darkwing's gadgets in a pool. "In Like Blunt"