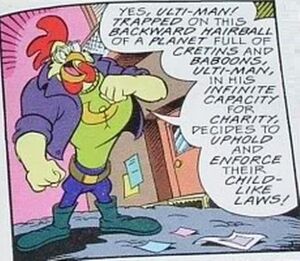 Ulti-Man is a superhero active on Earth. He was not born there, but for undisclosed reasons came to the planet and can't leave. He is not happy with this situations and openly looks down on Earthlings, but all the same has taken it upon himself to protect the population. As the president of the Super Power Union, Ulti-Man commands respect in the crimefighting community and is trusted on his word. Ulti-Man is well-versed in Earth's laws, or at least the ones of the United States of America. He uses this knowledge both to guide his actions as superhero and to sue when that is easier than a beatdown. Ulti-Man has the ability of flight and likely super-strength, while his one weakness is dandelions. He has an intro tune of "Da-Da Ta-Ta-Tum Da-Da Ta-Ta-Tum!" he sings himself and repeats a few times when he arrives at the battle scene.

Ulti-Man was born on a planet which name is not given. Through circumstances of unknown nature, he ended up on Earth. Because of his low opinion on the native population, it appears that when he left his own planet he was already of an age to make defined memories. It is unclear why he can't return to his home planet; it might be he has no means to go home, be at risk if he goes home, or that his home no longer exists.

It is unknown why he is on Earth or how his social network functions given his open disdain for the planet. Because he is the president of the Super Power Union, he must have some qualities for interaction, but it might take a personal touch to get to know that side of him. Because of his apparent knowledge of Earth's or America's laws, it is likely he went to law school.

When Ulti-Man gets involved personally, he announces his arrival by singing "Da-Da Ta-Ta-Tum Da-Da Ta-Ta-Tum!" a number of times. His powers, of which the origin is not stated, include flight and likely super-strength. His one weakness is dandelions, to which he is allergic. This information is fairly well known among villains and used against him if his involvement is expected.

A few good words to capture the essence of Ulti-Man with are "arrogant", "straightforward", "condescending", "intimidating", and "self-conscious".

Ulti-Man is a tall, muscular rooster with beige feithers. He and Steelbeak are nearly identical in appearance, with only a few subtle differences betraying who is who. Ulti-Man is slightly bigger, has a more pointy comb and wattles, has a natural beak, may or may not have a tail, and wears glasses. Due to his resemblance to Steelbeak, Ulti-Man also shares a resemblance to the Steelbeak lookalike. His superhero fashion sense includes a green shirt with a yellow "U"-crest on it, a purple jacket, blue pants, grey boots, a brown belt, and glasses.

Retrieved from "https://darkwingduck.fandom.com/wiki/Ulti-Man?oldid=20690"
Community content is available under CC-BY-SA unless otherwise noted.