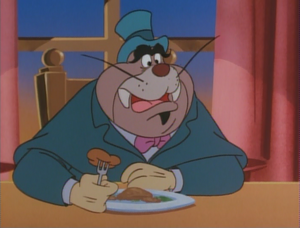 Arturo Tuskerninni is a recurring villain from Darkwing Duck. An anthropomorphic walrus, his schemes always revolve around films and film-making. He also has a gang of three penguins who follow him and do his bidding. One interesting characteristic of his is that he usually plays dumb, pretending he is either reformed or nothing doing anything wrong, only to reveal his scheme when the heroes are out of his way.

He was voiced by Kenneth Mars.

Tuskerninni began his career as a law-abiding actor, but whether justified or not, he wasn't getting any recognition or roles. This brought him in financial troubles and for most of this period he went hungry. Then he got his big acting break and a plentiful paycheck, which he used to treat himself on good food, leading to the corpulent form he possesses these days. And with his weight gain, he lost the prospect for more roles. Unwilling to leave the world of the silver screen and seek a job elsewhere, he became a criminal director creating schemes for himself to star in. One way or another, he gained the loyalty of three penguins who are now his felonious assistants. Playmates Toys files

A Duck by Any Other Name Hush, Hush Sweet Charlatan Film Flam Slaves to Fashion Adopt-a-Con When Gosalyn announces that she has a case for him, Darkwing happily enquires which of his enemies it is this time, specifying Tuskerninni and Steelbeak. A Revolution in Home Appliances Tuskerninni is one of the villains terrorized out of St. Canard when Darkwing, out of grief, drastically improves his strategies to make the city crime-free. Though because Gosalyn went back in time to undo her disappearance, this never happened. Time and Punishment

Tuskerninni puts money together with Steelbeak, Moliarty, Liquidator, Bushroot, Megavolt, and Quackerjack to watch the Miss Corn Fritters Pageant on pay-per-view. Their session is temporarily disrupted by Darkwing Duck, who suspects that they are involved in the abduction of Fluffy. However, Darkwing also meant to watch the pageant and readily agrees to pay ten bucks to get to watch along. Some hours later, the pageant finishes and everyone gets back to business, which for the villains means attacking Darkwing Duck. Tuskerninni attacks Darkwing, but the crimefighter throws a wet sponge in his path that makes him slip and trip into his colleagues, knocking them out cold. Darkwing calls the cops on them and they are all hauled off to jail, even though they had nothing to do with Fluffy's disappearance. The Kitty Kat Kaper Because Tuskerninni is one of the many clients of the villain costume designer who refuse to pay him properly for his work, he includes his outfit among his super-starch-powered costume army. Vogue's Gallery Tuskerninni and Negaduck are playing Go Fish. They are not hiding that they are both cheating and after much frustration because the game does not progress at all, Negaduck remarks that at least one of them has to start playing fair. What Goes Around!

Taurus Bulba has his biopic, Cyber Like Me: The Ballad of Taurus Bulba, made by Tuskerninni Productions. The Duck Knight Returns, Part 4 Darkwarrior Duck uses the invasion of "Darkwings" to go after the criminals of St. Canard. Tuskerninni and Moliarty are his final victims before Quiverwing Duck stops him. Crisis on Infinite Darkwings, Part 4 Steelbeak calls the walrus robot made by F.O.W.L. a Tuskerninni knockoff. F.O.W.L. Disposition, Part 3 Suff-Rage selects Tuskerninni for her League of Barely-Remembered Supervillains, an illusion for Darkwing Duck and Launchpad McQuack to fight and either be defeated or distracted by. The illusion of Tuskerninni uses a laser-camera against Darkwing during a one-on-one round. As with the others, Tuskerninni is defeated when the group is caught in a curtain. Just as Darkwing gloats, Suff-Rage reveals they were only an illusion. Campaign Carnage, Part 3

Crisis on Infinite Darkwings, Part 4 Campaign Carnage, Part 3 Tuskerninni becomes incarcerated in the new maximum security jail in St. Canard. Along with all other inmates, he is freed from his cell by Negaduck to hunt down a locked-in Darkwing. Orange Is the New Purple, Part 1

Retrieved from "https://darkwingduck.fandom.com/wiki/Tuskerninni?oldid=23130"
Community content is available under CC-BY-SA unless otherwise noted.