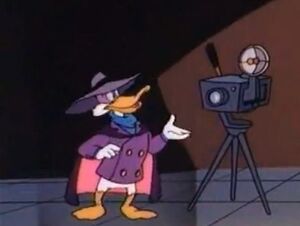 The tronsplitter is a creation of Megavolt, built from a toaster oven. He is incredibly proud and protective of it. The tronsplitter splits its target in two halves, one made from purely positrons and one mode from purely negatrons. Because the split also moves the two halves to the side, openings can be created if a barrier is hit. If people are split, the resulting two halves correspond to a good person and evil person relative to the moral standards of the original person. The tronsplitter can further affect the halves, but what that effect is depends on the device's configuration.

Because Darkwing recognized the tronsplitter for what it is on sight, Megavolt's tronsplitter is not the first of its kind. Although it looks like a camera, its original form was a toaster oven. As the name suggests, the tronsplitter splits objects, whether alive or not. In its regular mode, the split separates positrons and negatrons from each other to create two alternate versions of the original object. Halves from non-living objects are functionally the same as the original, but living halves inherit one extreme of the original's moral spectrum each. Megavolt's tron splitter also has a zoom lens which allows for other kinds of separations. Some of them are simply partial splits, resulting, for instance, in one person with four arms. Others result in many new forms that all act in tandem. It's not clear how the trons are influenced to do this in the latter scenario. In all cases, the tronsplitter can also remerge its targets.

When halves are hit by the tronsplitter originally gave them an extra charge that made the halves super-powered, or as Megavolt puts it, galvanized. "Negaduck" Possibly Megavolt tinkered with it after its initial use, because years later the tronsplitter instead could split halves down even further until only particles of the original object remained. "Crisis on Infinite Darkwings, Part 4"

Megavolt uses the tronsplitter to split a vault and gain access to the loot inside. After taking out a large amount of bags, he remerges the door. Somewhere his scheme has gone wrong, as instead of valuables, the bags contain ball bearings and Darkwing Duck. Megavolt accidentally hits Darkwing with the tronsplitter's beam before falling out of the window, leaving a Posiduck and a Negaduck. Negaduck comes to dread the prospect of possibly being fused again with Posiduck and tricks Megavolt into letting him near the tronsplitter, feigning technological interest to mask an intent to destroy it. Megavolt can barely save the tronsplitter from Negaduck's sledgehammer and in the process unintentionally hits him with another beam. This one galvanizes Negaduck, granting him all-destroying superpowers. Eager to test his new abilities, Negaduck promptly forgets about the tronsplitter and leaves. Wholesale destruction doesn't sound so good to Megavolt, since it won't leave anything to steal, so he grabs the tronsplitter, teams up with Posiduck, and goes after Negaduck. After a failed attempt to get the two next to each other so they can be remerged, Megavolt galvanizes Posiduck too to make him a match for Negaduck. This does work and the two are made one again mid-battle. With the danger gone, Megavolt takes the opportunity to test the tronsplitter's zoom function on the recovering hero, creating over-limbed Darkwings and multi-Darkwings before Gosalyn and Launchpad stop him. Megavolt gets the tronsplitter aimed at him and is split into two moral halves that are joined at the waist. The heroes leave him to deal with it himself. "Negaduck"

Searching for a way to defeat the fusion of Negaduck and Paddywhack, Darkwing recalls his experiences from when he himself was split into Negaduck and Posiduck and gets an idea. He visits Megavolt in jail to get the tronsplitter from him, which Megavolt is willing to lend him as long as it comes back in one piece. Darkwing and Launchpad install the tronsplitter in the Thunderquack's beak and hit Negaduck-Paddywhack with it. The hoped for result occurs, but the tronsplitter also separates Negaduck himself into a worse and a not-so-bad version. Paddywhack thinks this is hilarious and steals the tronsplitter to split Negaduck into tiny particles, which drift off with the wind. Not done yet, Paddywhack takes aim at the crowd of Darkwings, but they defeat him before he can fire. "Crisis on Infinite Darkwings, Part 4" The Negaduck particles settle below St. Canard as the ink, while Negaduck's sense of self is transported to the wasteland. When the ink becomes crucial in a battle for the fate of St. Canard and Duckburg, a portal is opened to the wasteland and Negaduck gets the chance to explain what happened to him. "Dangerous Currency, Part 4"

In the DuckTales special "Let's Get Dangerous!", an object identical in appearance to the Tronsplitter briefly appears in a closet at Darkwing Tower, though nothing is known about it.

Retrieved from "https://darkwingduck.fandom.com/wiki/Tronsplitter?oldid=28565"
Community content is available under CC-BY-SA unless otherwise noted.