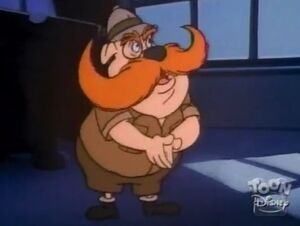 Major Trenchrot is a man with vision, albeit a criminal one. Little is given about his own record, but he is at ease in the malfeasant milieu. He aims to profit from his connections by building luxurious facilities specifically to cater to villains, aware of how difficult it is for them to spend their hard-stolen money on a destressing time away at conventional centers and resorts. Trenchrot is a business man first and foremost, having little to save himself from jail but saccharine social skills, knowledge of weapons, and a handful of henchmen at his employ. His short stature limits the threat he poses, but he uses this to his advantage by putting up a gentle front that buys him time and makes others vulnerable to his manipulations.

He is voiced by Charlie Adler.

Whether by legal or illegal means, Trenchrot is a man of wealth, allowing him to envision and execute big projects for big profits. He has a taste for class, even if his idea of it involves a disconcerting amount of guns and explosives. He holds the title of major, but it isn't revealed what organization bestowed him that rank.

Trenchrot operates by a simple system: as long as he can make use of another, they can live. As soon as the condition changes, hunting season's open. He is not one to prematurely destroy an opportunity, confident that he can make it work. He can think up a story on the spot that will work in his favor and knows how to act to convince his audience of his sincerity, although he does lay it on thickly.

As an enthusiast of weapons of all sort, Trenchrot likes to surround himself with them, even if they pose a hazard to his own health. He doesn't necessarily have to handle them himself. If his henchmen and his installations can take care of any problems on his behalf, that is well enough for him. Trenchrot isn't easily frightened, but unfortunately for him his henchmen tend to be less steadfast, meaning that he is left with little choice but to follow their lead and see himself to safety too.

Major Trenchrot is a short, rotund man with a large red moustache and a monocle on his right eye. He might favor hunter's outfits, but those might also simply be his choice of fashion for African operations specifically.

Under the guise of a banana plantation, Trenchrot works on creating a vacation destination for high caliber lawbreakers, complementary weapons for the first hundred guests included. While his location of choice is an island devoid of people, the gorillas living there are not pleased with the intrusion. Periodic fighting ensues, which does nothing to deter Trenchrot from his plans. Nor does the arrival of Beatrice Bruté on his plantation. He discovers soon enough she is working for SHUSH and prepares to get rid of her, but the gorillas save her. Though she can't warn SHUSH without the aid of technological equipment she no longer has access to, her disappearance causes SHUSH to send Darkwing Duck to the island. Trenchrot welcomes him with a smile, hoping to manipulate Darkwing in helping him get rid of the gorillas. It works insofar that Darkwing leads him to their village and he gets to burn it down, but his opponents recover quickly and attack the plantation with coconuts filled with explosive liquid. Trenchrot tries to flee with a helicopter, but Darkwing takes down the helicopter during a one-on-one battle inside. Trenchrot is arrested and taken off the island. Apes of Wrath

Retrieved from "https://darkwingduck.fandom.com/wiki/Trenchrot?oldid=21355"
Community content is available under CC-BY-SA unless otherwise noted.