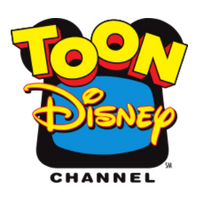 Toon Disney was a TV channel that aired from April 1998 to February 2009, when it was replaced with Disney XD.

Toon Disney aired episodes of Darkwing Duck from it's launch in 1998 until 2004, when the channel removed Darkwing Duck to make room for the then-new Jetix programming block. Some of the episodes were edited by content.

Toon Disney bumper next and later with Darkwing Duck, part A. ("Coming up next it's Darkwing Duck. Later, it's DuckTales...")

Toon Disney logo with Darkwing Duck in it, part B. ("...on Toon Disney!")
Add a photo to this gallery
Retrieved from "https://darkwingduck.fandom.com/wiki/Toon_Disney?oldid=23887"
Community content is available under CC-BY-SA unless otherwise noted.