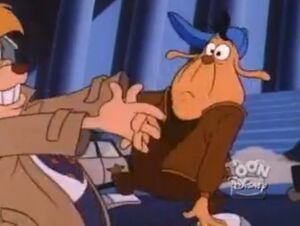 The cameraman is a hort, rotund dog with brown skin and black hair. He wears unassumin brown clothes, white gym shoes, and his most notable piece of attire is his blue cap.

Tom Lockjaw and his cameraman coincidentally drive by St. Canard City Hall when Darkwing Duck, Launchpad as Darkwing Decoy, Tuskerninni, and his penguins are fighting over the Diamond Duck of St. Canard. Smelling a story, Lockjaw sends his cameraman up to the roof to get footage. Darkwing makes for a good fight and retrieves the diamond, but the villains get away. The cameraman lowers his platform back to ground level and has to reassure an over-excited Lockjaw he got everything on tape. Lockjaw thanks him profusely before ordering him to keep filming when it seems there's still action going on on the roof. A Duck by Any Other Name The Cute Little Lost Bunnies movie is in theaters and the cameraman opts to watch it on the same night as Nega-Darkwing happens to be on the loose. The negatron-composed menace behaves rudely until he goes so far as to get out a gun and a tank. The man wisely flees. Negaduck

Retrieved from "https://darkwingduck.fandom.com/wiki/Tom_Lockjaw%27s_cameraman?oldid=20711"
Community content is available under CC-BY-SA unless otherwise noted.