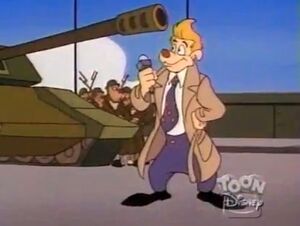 Tom Lockjaw is a journalist for Soft Copy, a news program on Channel 3, and a host for St. Canard Tonight. He's the most successful news anchor in St. Canard and Duckburg, which opens doors for him that keep him on top. Lockjaw knows what he is worth and while he is for the most part a sincere journalist, he likes to add a few drops of sensationalism and gets manipulative when the truth is a risk to his career.

He is voiced by S. Scott Bullock in most episodes. His voice actor for "A Duck by Any Other Name" is unknown while Jim Cummings voices him in "Stressed to Kill".

Tom Lockjaw is the most popular news face on televison in St. Canard and Duckburg. He is the host or one of the hosts of Soft Copy, A Duck by Any Other Name St. Canard Tonight, Let's Get Respectable and possibly Action 5 News. Just Us Justice Ducks Part One He has one cameraman to assist him when he goes out looking for stories. Said cameraman considers Lockjaw unduly interested in the way reports put him in the spotlight, and Lockjaw does not deny that. This is why he has it out for Darkwing Duck despite initially being a fan; he's been derisive ever since reporting Launchpad McQuack as the civilian identity of the superhero and having to rectify that. A Duck by Any Other Name He has no such history with Gizmoduck and is openly a fan of him. Up, Up and Awry

While he has a preference for stories with a high excitement value, he can present any topic with equal outward enthusiasm. In the end, what matters most to him is his face on television and the audience wanting him back the next report. In part because his credibility depends on it, he holds the truth in high regard, but that doesn't mean he has to like it. On the hunt for a scoop, he may make a mistake and when he has to get back on it later to admit he was wrong, he'll get petty and downplay the importance of the subject in the first place. A Duck by Any Other Name

Tom Lockjaw is a medium-to-tall dog with blond hair. He always wears a tie and dresses in a full suit when in the studio and in a part-suit covered by a trenchcoat when he's out covering a story.

Tom Lockjaw and his cameraman coincidentally drive by St. Canard City Hall when Darkwing Duck, Launchpad as Darkwing Decoy, Tuskerninni, and his penguins are fighting over the Diamond Duck of St. Canard. Smelling a story, he sends his cameraman up to the roof to get footage. Lockjaw himself watches the action through the equipment in the van and is very impressed, having thought prior that "Darkwing Duck" was just some publicity stunt. Darkwing makes for a good fight and retrieves the diamond, but the villains get away. Launchpad apologizes, taking his mask off as he talks about not being a good enough Darkwing. From the angle he's on, the camera below can see him clearly and with the real Darkwing not in the shot, Lockjaw concludes that Launchpad is Darkwing Duck. Few hours later, he's got his report on the battle ready and reveals Darkwing to be Launchpad. This causes more than a few problems to the Mallard household, and Launchpad knows he can't tell Lockjaw he's not the real Darkwing because he would never believe him. An opportunity to set things straight arises when Tuskerninni abducts Gosalyn and Honker. Darkwing and Launchpad free them together and show themselves at the same time to the cameras waiting outside the Canard Multiplex Theater. Lockjaw is not pleased that his scoop turned out to be wrong. To save face, when he reports on Tuskerninni's arrest that night and the remaining mystery of the caped crimefighter's civilian identity, he insists that no one cares about Darkwing Duck anyway and that he has a way more interesting story on the baby pandas born at the St. Canard Zoo. A Duck by Any Other Name Lockjaw hosts a report on the plague of bad-tasting water that St. Canard is suffering on top of the drought. He interviews two women at La Grande Yuppe, whose immense wealth even can't guarantee them decent water. The next one to speak is Bud Flood, owner of the Sparkling Crystal Pure Flood Water brand. He explains the bad taste that his competition's water suffers from is due to natural molecular contamination, but promises that his water will always taste good, turning what should be an informative piece into a commercial. Lockjaw lets it be, but reminds the audience that officials suspect someone has intentionally befouled St. Canard's bottled waters. Dry Hard

Tom Lockjaw presents a special news bulletin on the fact that Bushroot is robbing Fabric King as he speaks. Night of the Living Spud When Gizmoduck returns to St. Canard, Lockjaw reports on it with nothing but praise for the hero. Up, Up and Awry Lockjaw is live on Audubon Bay Bridge when the National Guard and Gizmoduck arrive to save St. Canard from the Fearsome Five. He presumably gets away before the bridge gets cut in halves. Upon the suggestion of forming the Justice Ducks, Gizmoduck already plans ahead for an exclusive interbiew with Tom Lockjaw. Just Us Justice Ducks, Part 1 The St. Canard Power Company has a new super-powerful generator about to be put to use. Tom Lockjaw makes a report on it on their behalf. Not long after, he gets to report on the uprising of household appliances due to the generator being tampered with. Lockjaw bursts into laughter on television at what he thinks is a nonsense report, but then he gets attacked by a hair clipper and a blowdryer and the situation isn't as funny anymore when they shave off all his hair. A Revolution in Home Appliances With Negaduck on the loose, Lockjaw gets too report on him robbing the first to ninth national bank and has an opportunity for an interview when he's robbing the tenth. Negaduck uses the interview to establish his rule and Lockjaw has the audacity to ask what the penalty for disobedience is. Negaduck assures him he doesn't want to know and takes over as sponsor of Channel 3. Lockjaw faints. Going Nowhere Fast Negaduck is soon again the topic of one of Lockjaw's reports, though he doesn't know it. Negaduck has been committing crimes disguised as Darkwing Duck and Darkwing's supposed step onto the path of evil is the talk of the day. Lockjaw relishes the sensational story of a hero suddenly guilty of arson, burglary, hijacking, kidnapping, cat-kicking, insider trading, and spitting on the sidewalk and of the mayor's reward of one million dollars for the person who catches him. Disguise the Limit As host of St. Canard Tonight, Lockjaw presents a report on the popularity of various crimefighters in St. Canard. Gizmoduck tops the list and Darkwing is on the bottom. Let's Get Respectable As with the other victims of the relaxitron, Tom Lockjaw continues his work, but with no spirit behind it. He dispassionately hosts a special news bulletin about two giant pumpkins "forcibly borrowing" irreplaceable Ancient Egyptian artifacts from the museum. Stressed to Kill Lockjaw presents the news together with Daphne Duckbill. Their first topic for the evening is another case of property damage caused by Darkwing in his attempt to uphold justice. The program is interrupted by the Rubber Chicken on advice of Gosalyn so he can reach other mutants in St. Canard to ask for help against Cement Head. Once he's gone, Duckbill admits to her colleague that she has a mutant power of her own: the ability to display cold symptoms at will. She gives a demonstration, sneezing Lockjaw's clothes right of him. Mutantcy on the Bouncy

Lockjaw is live on Audubon Bay Bridge when the National Guard and Gizmoduck arrive to save St. Canard from the Fearsome Five. He presumably gets away before the bridge gets cut in halves. Just Us Justice Ducks Part One

Retrieved from "https://darkwingduck.fandom.com/wiki/Tom_Lockjaw?oldid=20710"
Community content is available under CC-BY-SA unless otherwise noted.