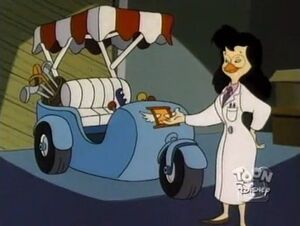 The time machine is one of the greatest inventions that have come forth from the mind of Sara Bellum. It looks like a golf cart and the only thing hinting at its purpose for time travel rather than recreation is a winged hourglass logo on the front. It is operated by polka music.

The time machine only has an equal in the time top designed and built by Quackerjack. The time machine was built first and beats the first time top in comfort and functionality, but loses the same competition against the second time top.

Darkwing is asked to deliver a package to a secret SHUSH laboratory and he does so on the way to Gosalyn's school. He tells her to stay put in the car, but as always, she doesn't obey. From J. Gander Hooter and Sara Bellum, Darkwing learns that the package contains a cassette tape with polka music on it and that this is needed to activate Bellum's latest invention: the time machine. Gosalyn coincidentally hides in the back of the time machine when Bellum shows Darkwing the vehicle. Darkwing, excited, gets in too and starts meddling with the controls until he accidentally activates it, thereby making him and Gosalyn the test subjects for the time machine's first journey. The trip takes them to Darkwing's childhood days, where little Drakey Mallard is being cajoled into gang activity by Lamont, the younger brother of the King. They rob a music store, which Darkwing can't help but try to stop until Gosalyn pulls him away and reminds him of the possible consequences of meddling with the past. Because the past has nothing more to offer, the two return to their home time period, but a nasty surprise awaits them. Darkwing's interference, even if it was short-lived, was enough to damage the present. Rather than a forgotten low-level criminal, the King has worked his way up to crimelord of the city. Darkwing Duck never existed because Drakey remained in the King's service and now is Cecile's caretaker. SHUSH doesn't exist either and Hooter and Bellum are garage owners. After a run-in with the King's gang, Darkwing and Gosalyn hurry back to the past to set things right. They pick up Drakey after the gang has left him and the crime scene and teach him to be a hero. They also help him defeat the King and his men, then return home to their restored present. Paraducks Quackerjack uses his time top to go back to 1291 and prevent the invention of the first yoyo. Darkwing and Launchpad borrow the time machine from SHUSH to follow him. Darkwing makes a mistake in activating the time machine within Darkwing Tower, because Audubon Bay Bridge does not exist in 1291 and thus the vehicle and its two passengers fall down into Audubon Bay. Darkwing and Launchpad are fished out by Binketh, but they have to leave the time machine behind for the time being. Quack of Ages

By going forward in time with the time machine, Darkwing and Launchpad find that Launchpad one day will have a big impact on the course of history, as every living being in future-St. Canard and perhaps the future-world looks like him. The Duck Knight Returns, Part 1

By going forward in time with the time machine, Darkwing and Launchpad find that Launchpad one day will have a big impact on the course of history, as every living being in future-St. Canard and perhaps the future-world looks like him. The Duck Knight Returns, Part 1

Retrieved from "https://darkwingduck.fandom.com/wiki/Time_machine?oldid=23647"
Community content is available under CC-BY-SA unless otherwise noted.