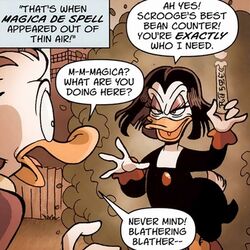 Time candles are magical artifacts that grant access to the past when lit. Their height indicates how much time in the past is left.

The purpose of a time candle is to send the user back in time on an elasticated cord, as it were. As soon as the candle's effect has worn off, which is when it has been thoroughly bruned down, the user is pulled back to their own time. It is unknown if a time candle is a one-time use or can be restored after use. Time candles spread an unpleasant smell. There are also time lightbulbs, which presumably have neither drawback. They are more expensive, though.

In the recent past, Magica De Spell uses a time candle to get back to over a year prior to abduct Fenton Crackshell. She needs him to authenticate the Number One Dime she is planning to steal and is oblivious at the time to the fact she's seizing the wearer of the Gizmosuit. Missing out on more than a year of life going on leaves Fenton in a decidely confused state for quite some time. "Dangerous Currency, Part 3"

Retrieved from "https://darkwingduck.fandom.com/wiki/Time_candle?oldid=22360"
Community content is available under CC-BY-SA unless otherwise noted.