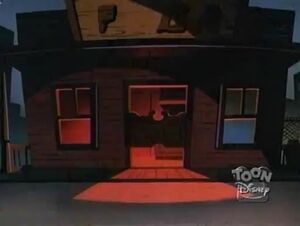 The Old Haunt is a Western-style pub situated in the bad part of St. Canard. Due to its location, its clientele are primarily crooks. The pub is run by a single bartender.

Although not of significant size, The Old Haunt is an eyecatcher in the bad part of time due to its mild Wild West theme and open surroundings. It holds a good reputation among villains, attracting the patronage of supervillains like Megavolt and international spies like Ho. The Old Haunt enjoys an easy atmosphere that's only rarely disturbed by outsiders.

Megavolt visits The Old Haunt to recover from a robbery thwarted by Darkwing Duck. Unbeknownst to him, during that robbery he split up Darkwing in a good half and a bad half by means of the tronsplitter. Darkwing's team and positron-Darkwing want Megavolt's help to save the original Darkwing, while negatron-Darkwing wants to ensure he'll stay good-free. As halves of Darkwing, both know that Megavolt is a regular at The Old Haunt and go look for him. Negatron-Darkwing arrives first, surprising and disturbing the customers with his entrance. He and Megavolt target each other, but negatron-Darkwing easily shortcircuits the supervillain with a drink before he can draw his electro-gun. The bartender and patrons flee upon seeing that, leaving negatron-Darkwing time to explain he is Megavolt's creation to trick the other into showing him the tronsplitter. Once they leave, the others return. Things are back to normal when Darkwing's team arrives, both Launchpad and Gosalyn dressed up to look like they fit among the crooks. Gosalyn takes the act too far and angers a patron. Launchpad receives a punch and Gosalyn is only saved by the appearance of positron-Darkwing. He's too soft to do anything, but the memory of negatron-Darkwing is fresh among the clientele. They cooperate as the crimefighters need them to. "Negaduck"