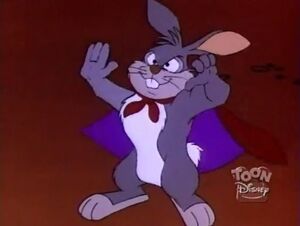 The history of The Adventures of Superbunny begins with the Darkwing Duck comic book series. Licensor Darkwing Duck and publisher Awesome Comic Book Corporation did not see eye to eye on the prototype issue, so Darkwing took it upon himself to rewrite it. His script was constantly hijacked by his social circle, who had their own ideas for it. Binkie Muddlefoot was one of the hijackers and tried to make the story about Mr. Bunny, a happy little rabbit with lots of animal friends such as Robin Redbreast. Darkwing got back the script, but when it was time to wrap up the plot the parts dedicated to the rabbit confused him into accidentally creating Superbunny, his comic book self's faithful pet. The supercritter got one scene, then was written out. Darkwing's script was harshly rejected by the Awesome Comic Book Corporation, but Superbunny got them interested in a spinoff comic: The Adventures of Superbunny. A thoroughly offended Darkwing then took his script to Disney to see if they were interested. Because Darkwing Duck has creative ownership, it is unknown if the The Adventures of Superbunny ever saw the light of day.

In Darkwing's script for his own comic book, Superbunny is his faithful pet. He tries to assist Darkwing against Megavolt, but is summarily beaten by the villain. The comic book version of Darkwing then tells him to leave the story altogether. Short as Superbunny's one scene is, it inspires publisher Awesome Comic Book Corporation to create a spinoff comic based on Superbunny: The Adventures of Superbunny. Comic Book Capers

Retrieved from "https://darkwingduck.fandom.com/wiki/The_Adventures_of_Superbunny?oldid=21586"
Community content is available under CC-BY-SA unless otherwise noted.