Taurus Bulba is a major criminal mastermind in St. Canard. Darkwing Duck regards him as one of his deadliest enemies. He was voiced by Tim Curry. In the DuckTales reboot, he is voiced by James Monroe Iglehart. 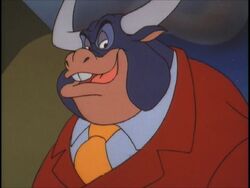 Not much is known about Taurus Bulba's background. In "Darkly Dawns the Duck, Part 1", Taurus serves a 8 year jail sentence yet is still involved in criminal affairs from the prison. In fact, he seems to find being incarcerated to only be a minor inconvenience, viewing his prison cell as the perfect hideout and cover for his ongoing activities. From prison, he manages a gang consisting of Hammerhead Hannigan, Hoof, Mouth, Clovis, and Tantalus.

After his henchmen stole the Waddlemeyer Ramrod Bulba gave orders to kidnap Gosalyn because he believed, as she was Professor Waddlemeyer's only living relative, that she knew the secret code to active the Ramrod, he then escapes, destroying much of the prison in the process of launching his hidden airship."Darkly Dawns the Duck, Part 1"

Apart from a few wry comedic moments, Taurus Bulba is a menacing character. He is in possession of incredible cunning as well as prodigious physical strength. In "Darkly Dawns the Duck, Part 1", it is strongly implied his henchmen murdered Gosalyn's grandfather Professor Waddlemeyer, on his order (though apparently they did so in reverse order, killing him before getting the machine's codes from him), and his men and pet condor Tantalus also nearly kill Gosalyn as well. Gosalyn is afraid of him in both of his cartoon appearances, though she overcomes her fear during "Steerminator" while caged alongside Honker.

After being rebuilt as the Steerminator, Bulba has become completely unhinged, with a single-minded obsession to destroy Darkwing Duck. This obsession is also born out in the Boom! comics where Bulba actually uses Darkwing's silhouette as the insignia for Quackwerks.

Taurus is a blue bull with a muscular build. He wears a red jacket with gold buttons, a white shirt with a yellow tie, gray pants and black shoes. As a cyborg, his horns have been replaced by a missle launcher and laser, his face covered by a mask, his shoulders, right eye and lower half are now mechanical and all parts are red. His left arm converts into a laser cannon. At the end of the episode, his arms turn into wings and his lower half becomes an engine before he flies away.

Thanks to the efforts of F.O.W.L., Bulba managed to survive, or perhaps was resurrected, and was made into a nearly unstoppable cyborg. F.O.W.L. subsequently assumed that Bulba would accept their offer of employment following their restoration of him. Bulba pointedly declined the offer. destroying the F.O.W.L. labratory and terrorizing Steelbeak in the process; and elected to attempt to gain revenge on Darkwing and Gosalyn. After being once again defeated by Darkwing and Gosalyn, he managed to flee into the sky thanks to his cyborg enhancements, swearing that he would get his revenge. As the Steerminator, Taurus now suffers from an overheating problem, which causes his mind and body to "lock up" just like a troubled computer."Steerminator"

"Brawl in the Family"

Taurus Bulba returns as the CEO and mastermind behind the mega-corporation Quackwerks, in an attempt to get revenge on Darkwing Duck and his companions, but more importantly, to give St. Canard a new kind of villain, as he considers the other villains unprofessional. It is stated that, between the events of "Steerminator" and the comic, Bulba went to war against F.O.W.L. for turning him into a cyborg, and was destroyed in battle, but he was able to control his consciousness so that he could travel through and possess electronics, eventually reforming his cyborg body after possessing a blender that F.O.W.L. sold in a yard sale to Gyro Gearloose. He demanded Gyro and his Helper give him the password to the Gizmosuit, but the suit did not recognize Bulba as a person due to being a cyborg. So Bulba took over St. Canard in order to net him the Gizmosuit and have all his prisoners say the entire English language to get the password, which Gyro had now changed to avoid chances of that happening. Later, Gosalyn defeated Bulba once and for all after saving St. Canard and registering the Gizmosuit."The Duck Knight Returns"

"The Duck Knight Returns" "Toy with Me" 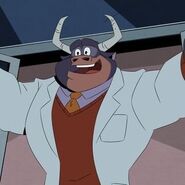 Taurus in the DuckTales reboot.
Deutsch
Community content is available under CC-BY-SA unless otherwise noted.
Advertisement