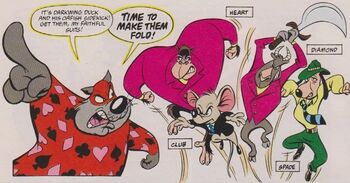 The Suits are a four-membered team of villains who operate in service of Pokerface. They are themed after the suits of playing cards, with each member representing another card. They're excellent fighters who, while operating together, appear to favor handling combat situations individually. They have their headquarters within Pokerface's office in One Chump Plaza Casino.

The team consists of:

The Suits, named after both their attire style and their playing card theme, are the four crooks Pokerface brought together as his henchmen. Heart is the muscle of the team, being the first choice to deal damage if the situation calls for it. Club wields a club and has the benefit of a harmless appearance due to his size to fool people into lowering their guard. Diamond prefers to cut with his scimitar and is popular with women. And Spade has a way of saying it like it is, choosing hand-to-hand combat like Heart does.

The Suits assist Pokerface in a scheme to poison the water supply for One Chump Plaza Casino with gambleholic toxin to make the patrons spend all they have. Darkwing Duck picks up their trail when the kill the city controller and crashes Pokerface's office. The four beat and tie him and Launchpad up, then leave with Pokerface to the water tank on the roof. Darkwing won't stay put, though, and comes after them. Because Darkwing himself has fallen victim to the gambleholic toxin, Launchpad has to bet him he can't defeat them to make sure he has a chance. Darkwing uses Heart's size against him, tricks Club, get unexpected assistance from a patron against Diamond, and thrashes Spade when he makes a rude comment about the crimefighter's choice of wardrobe. Pokerface fares a little better, but not enough for them to escape jailtime. "Feeling Flushed"

Retrieved from "https://darkwingduck.fandom.com/wiki/Suits?oldid=18205"
Community content is available under CC-BY-SA unless otherwise noted.