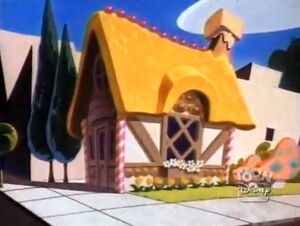 The Sugar and Spice and Everything Nice Bakery is a St. Canardian bakery specialized in confectionery. It also is Negaduck's hideout and contains a portal to the Negaverse in a large cake.

The Sugar and Spice and Everything Nice Bakery is a picturesque building with a small garden as decor. The store sells cakes and sweets of various kind, but it's unknown who owns or operates it. Negaduck has his portal between the Negaverse and Darkwing's world stored inside a multi-layered cake in the back and has free access to it. Logically this would be due to some arrangement with the storekeepers, but the terms are as unclear as they are.

It is Honker's birthday and Launchpad gets him a sailor-themed peanut butter, honey and sauerkraut cake from the Sugar and Spice and Everything Nice Bakery. Coincidentally, he is there when Negaduck enters with his loot to return to his home, the Negaverse. Launchpad doesn't see him, but he does see the rest of the Fearsome Four, who have followed their boss to discover his secret hideout. While Launchpad goes to warn Darkwing, the four villains look for Negaduck, curious why he of all people would choose the Sugar and Spice and Everything Nice Bakery as hideout. They locate him in the back by the time Darkwing arrives. Negaduck is furious and accuses his henchmen of having led the crimefighter to him. To prove they're better than that, the four attack Darkwing and get rid of him by throwing him into the glowing cake, unaware that that's a transdimensional portal. Negaduck jumps after him to save his own world from Darkwing's influence, but is too late to intercept him. Through and through, Darkwing comes to train the Friendly Four of the Negaverse to stand up against Negaduck and the city improves noticeably. Beyond angry, Negaduck vows he will take revenge by ruining Darkwing's St. Canard and orders the Nega-Muddlefoots and Nega-Launchpad to come with him. Inside the Nega-Sugar and Spice and Everything Nice Bakery, the group is stopped by the Friendly Four, who take out Negaduck's minions with little difficulty while Darkwing fights Negaduck. Negaduck escapes through the portal, so Darkwing follows and accidentally causes the portal to self-destruct. Negaduck gets sucked into the maelstrom, but Darkwing reaches the exit. He buys another birthday cake for Honker and goes home. Life, the Negaverse and Everything

Retrieved from "https://darkwingduck.fandom.com/wiki/Sugar_and_Spice_and_Everything_Nice_Bakery?oldid=22947"
Community content is available under CC-BY-SA unless otherwise noted.