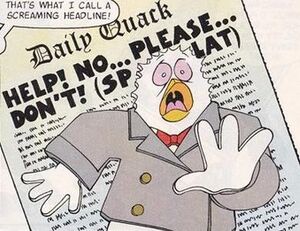 Stool Pigeon is an undercover agent of SHUSH. That is, he was until his career got prematurely squeezed out of him along with his life.

Stool Pigeon is one of SHUSH's agents charged with undercover work.

Like most of SHUSH's agents, Pigeon is dedicated to his work. While the thought of dying certainly doesn't appeal to him, he'll put the mission before his own life.

Stool Pigeon is a white-feathered pigeon with no hair. He appears to be a little on the corpulent side and wears a grey suit with red bow tie.

Pigeon is on a deep-cover mission to obtain important documents from F.O.W.L.. He is to hand them over to Darkwing Duck at the Daily Quack printing press facility, but Razor Quill and his men track him to that location. Before they get near, Pigeon manages to hide the backpack containing the documents behind a press. It does little for him, as the F.O.W.L. agents shove him into the press, flattening him onto a newspaper just before Darkwing arrives. Darkwing even thinks he's late until Launchpad points out the gruesome newspaper and finds the backpack. Gosalyn Alone

Retrieved from "https://darkwingduck.fandom.com/wiki/Stool_Pigeon?oldid=20734"
Community content is available under CC-BY-SA unless otherwise noted.