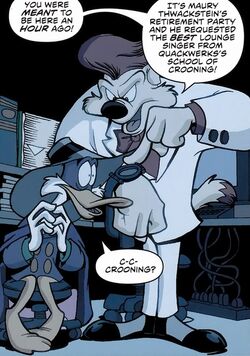 The Steelbeak lookalike has some notable similarities to Steelbeak that at a first glance make it difficult to distinguish between them.

Like all of St. Canard, the man is or was an employee at the Quackwerks Corporation. He either is some high level of manager or involved with personnel matters.

The man is a good-natured fellow who works well under stress and cares more about what can be done than how things aren't going to plan. This may have some motivation of self-interest, because he's not the most competent person himself.

The man is a tall, muscular dog with red hair and beige fur. He has the same fashion sense as Steelbeak, or at least when a special occasion requires he dons a suit. This combination of traits makes it easy to mistake him for the terrorist and to a lesser extent for the superhero Ulti-Man.

The man is involved with the organization of Maury Thwackstein's retirement party. He mistakes Darkwing Duck for the lounge singer that was ordered for the party and pushes him on stage. Darkwing is a little shaken due to a moment of mistaking the man for his old enemy Steelbeak but he rolls with it. The Duck Knight Returns, Part 2

Retrieved from "https://darkwingduck.fandom.com/wiki/Steelbeak_lookalike?oldid=21848"
Community content is available under CC-BY-SA unless otherwise noted.