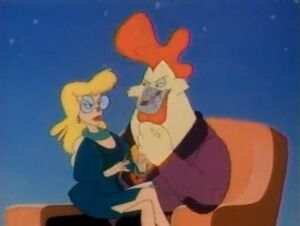 Stealbeak's date is a woman with poor taste in men, but in her defense that's a club with more members. Still, it would have been wise if she'd arranged some leverage on her side before mingling with loud and proud terrorists such as Steelbeak. She may not expect to have anything to fear from them, but that does nothing for the fact that she's disposable.

While likely not part of St. Canard's felonious side of society, she does knowingly date within those circles; and not bottom level either. Somehow she managed to get cozy with Steelbeak and dated him until he neglected her for nearly a year. When she confronted him about it, he went on a rant how important and busy he is and then literally dumped her when that was convenient to him. Provided she survived whatever Steelbreak sent her through, odds are she broke up with him.

Either the woman is horribly naive or misguided in her sense of self-importance.

The woman is a slender dognose about a head shorter than Steelbeak. She has blonde hair reaching just below her shoulders, wears glasses, and dresses in business suits.

After ten months of being held off, the woman finally had an opportunity to have some private time with Steelbeak again. His utterly unapologetic attitude annoys her, but she only gets so much time to be angry about that before Steelbeak dumps her through a trapdoor when High Command unexpectedly calls. Cleanliness Is Next to Badliness

Retrieved from "https://darkwingduck.fandom.com/wiki/Steelbeak%27s_date?oldid=23630"
Community content is available under CC-BY-SA unless otherwise noted.