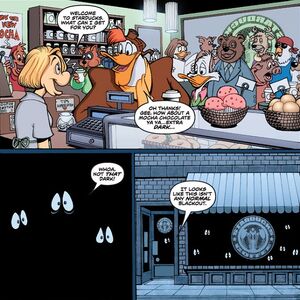 Starducks is a chain of coffeehouses. It is thanks to its abundance of stores in St. Canard that the city is known to "never sleep soundly". The population relies on the brand to keep them awake and going, ensuring the shops a steady supply of customers despite the creepy logo.

Starducks is a series of stores that primarily sell coffee and in addition small food that can be eaten with it, like bagels and cupcakes. Most of St. Canard visits a Starducks sooner or later to reenergize. The Duck Knight Returns, Part 1 One can only imagine how Nodoff feels about the brand.

While Launchpad and Drake Mallard stop by a Starducks outlet for a drink, a peculiar blackout occurs that exclusively targets Starducks. Drake figures this is a villain's doing and dons his Darkwing Duck outfit. It turns out that Megavolt is keeping Starducks hostage for ransom, knowing St. Canard depends on the business to keep going. Darkwing and Launchpad find and defeat Megavolt on the rooftops. This event becomes known as "The Starducks Caper" and it is the last of Darkwing's cases for a year The Duck Knight Returns, Part 1 due to an attack by Negaduck on 537 Avian Way the next morning. As the Mallards are enjoying breakfast with free Starducks coffee, the villain barges in armed to the teeth, explaining that he's been watching them for months. The three are saved by the crimebots, but Darkwing is both shocked and humiliated and retires Darkwing. The Duck Knight Returns, Part 3 However, the crimebots become more and more fixed on even the smallest illegalities and Drake has to become Darkwing again to figure out what's going on. At the same time, the Fearsome Four end their villain retirement and reunite to take revenge on Quackwerks. Quackerjack provides the vehicle, which he parks in front of a Starducks to lead the gang to their first target across the street: Clint Wacky's Wacky Wonders. The Duck Knight Returns, Part 2 Once they're done, they trash a few crimebots that bother them, then notice the Thunderquack in the sky and return to their vehicle to give chase. The Duck Knight Returns, Part 3 Through various events, it is discovered that the Quackwerks Corporation is owned by Taurus Bulba. Darkwing and his team fight him and the battle ends in front of a Starducks. The Duck Knight Returns, Part 4 With Quackwerks reformed and Launchpad put in charge of the company, things go back to how they were. Due to Launchpad's new power, he gains access to files relating to the disappearance of Morgana Macawber and manages to find her in catatonic state in a Starducks shop. A mere sneeze of hers transforms everyone present in a variety of mythological creatures. Launchpad has her brought to Quackwerks HQ in hopes Darkwing can get through to her. Crisis on Infinite Darkwings, Part 1 At the same time, alternative "Darkwings" show up around St. Canard, having been abducted from their own homes and brainwashed by Negaduck and Magica De Spell. One of them, Quiverwing Duck, was abducted in front of a Starducks. Crisis on Infinite Darkwings, Part 2 In the dimension of Darkwing Duck, he brings chaos by shooting at the police when they are chasing after Ammonia Pine, causing one car to crash into a Starducks. Crisis on Infinite Darkwings, Part 1

Months later, Darkwing has to battle Cat-Tankerous. The villain has the advantage of strength, being able to lift an entire Starducks shop and throw it at the hero, although he misses. Campaign Carnage, Part 2

Retrieved from "https://darkwingduck.fandom.com/wiki/Starducks?oldid=21846"
Community content is available under CC-BY-SA unless otherwise noted.