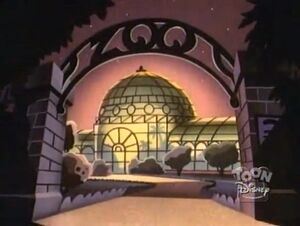 The St. Canard Zoo is a facility in St. Canard. It makes for a fun place to visit with the whole family and occasionally is a convenient hideout for criminals.

Design-wise, the zoo looks like it's been around for a good few decades.

Tom Lockjaw reports on the birth of the pandas Pingpong and Wingding at the St. Canard Zoo. A Duck by Any Other Name While exploring the city, Jambalaya Jake and Gumbo discover the reptile house at the zoo, which makes them feel at home. They pick it as a hideout secondary to the sewers and it is there they bring Launchpad McQuack after abducting him. Jake places explosives around their hostage and has Gumbo keep an eye on him while he goes to take care of Darkwing Duck. Gumbo, however, nearly eats Launchpad and is only kept at bay until Jake returns by Launchpad feeding him homemade brownies. Jake prepares to blow up Launchpad, but Darkwing is not as dead as Jake assumed and saves his friend in time. His photos to distribute among fans get damaged in the fight, though, and irritated, Darkwing accidentally activates the explosives himself. The two heroes only survive by quickly hiding in a turtle's shell. Can't Bayou Love Gosalyn considers an encounter with gorillas in the wild even better than going to the zoo. Apes of Wrath

Retrieved from "https://darkwingduck.fandom.com/wiki/St._Canard_Zoo?oldid=22946"
Community content is available under CC-BY-SA unless otherwise noted.