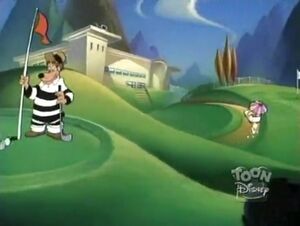 The St. Canard Minimum Security Prison is the place the judge sends the criminals to who've not committed any violent crimes and who aren't an escape risk. The prison is big on positive reinforcement and to that end has many facilities that wouldn't be out of place in a resort.

The St. Canard Minimum Security Prison in St. Canard is headed by a female warden who sees to it that the inmates have a wide selection of activities to spend their time on such as golf and swimming. None of the criminals sentenced to jail time in the minimum security prison are particularly restless, but still the warden makes sure to regularly thank them for not trying to escape.

The St. Canard Minimum Security Prison may have been disbanded when the Quackwerks Corporation took control of St. Canard and installed a new regime for dealing with criminals. In that case, the minimum security prison has been joined with the other prison facilities into one: the Quackwerks Detention Camp.

Numero Uno hires Shyster and Loophole Tax Attorneys to keep him out of jail for tax evasion. They do not succeed and Uno is sent off to the St. Canard Minimum Security Prison. When Shyster and Loophole are abducted, Darkwing Duck wrongly suspects Uno and opts to abduct him right back so he can tell where they are. To this end, he tries to pluck him out of jail by jumping out of the Thunderquack with elasto-suspenders on. He gives it three attempts, but Uno barely even notices him while he enjoys himself with golf, relaxing in the swimming pool, and barbecuing. Even when Darkwing in his final shot ends up naked, he is not worth getting distracted by. Jurassic Jumble

Retrieved from "https://darkwingduck.fandom.com/wiki/St._Canard_Minimum_Security_Prison?oldid=21969"
Community content is available under CC-BY-SA unless otherwise noted.