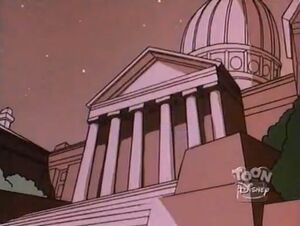 St. Canard City Hall is the chief administrative building of St. Canard. Like the Federal Gold Depository, it gets surprisingly rarely targeted by the thousand-and-one villains residing in the city.

St. Canard City Hall is where the mayor, the city council, its associated departments, and their employees perform their jobs. The central dome is a miniature museum that houses the Diamond Duck of St. Canard, the symbol of the city. A Duck by Any Other Name Presumably, the building also usually has the Key to the City of St. Canard in storage.

Tuskerninni and his penguins set their sights on the Diamond Duck of St. Canard. They stage their theft as part of a space opera and easily get rid off the guards by knocking them on the head with hammers. Their crime seems to be a breeze until Darkwing Duck appears. While Launchpad as Darkwing Decoy goes after the penguins, Darkwing chases Tuskerninni up to the roof of City Hall. Just as they enter the open, Tom Lockjaw's news van drives by and the fight draws the attention of him and his cameraman. They immediately set up equipment to record the happenings, although neither Tuskerninni nor Darkwing is aware of that. Darkwing shoots itching powder at his opponent, which makes him lose his hold on the Diamond Duck, which Darkwing retrieves with the gas gun's plunger function. Meanwhile, the penguins escape Launchpad by fetching their working UFO from a broom closet and come to their boss's aid. They knock Darkwing over the roof's edge and grab the diamond as he's knocked into. The hero in peril only makes Lockjaw think of higher ratings, but Darkwing has the luck to land on a horizontal flagpole and to be launched back up. At the highest point, he spin-kicks the UFO and once more retrieves the Diamond Duck of St. Canard. The police arrives by then and Tuskerninni decides it's better to flee and leave the diamond be for now. Launchpad joins Darkwing on the roof as the villains escape in the UFO and apologizes for not doing a better job. As he takes off the hat and mask of his Darkwing Decoy costume, Darkwing assures him he was good enough. Down below, the cameraman is still filming and with only Launchpad visible at the given angle, Lockjaw believes he has the scoop on Darkwing Duck's secret identity. A Duck by Any Other Name The evil half of Darkwing, Negaduck, created by the tronsplitter gets made more powerful by a second shot that galvanizes him. He uses his new abilities to demolish City Hall. In order to have someone to stop him, Megavolt galvanizes Posiduck, the good half, too. He restores City Hall to its former glory. Negaduck attacks him on the spot for his meddling, and their proximity allows Megavolt to use the tronsplitter to recombine them. Launchpad and Gosalyn run up to Darkwing to welcome him back. Negaduck Megavolt, Darkwing, and Launchpad run past St. Canard City Hall in pursuit of the frequency fiends. The Frequency Fiends Cement Head goes on the run with a large amount of money. Darkwing catches up with him at City Hall, but so does the mutant team consisting of the Rubber Chicken, Glue Gal, Banana Boy, and the Sneezemaster. They attack Cement Head first, but the Sneezemaster accidentally defeats her own team. Darkwing and Launchpad don't fare any better against Cement Head, so Darkwing and the Rubber Chicken team up upon recovery. Cement Head's superior strength outmatches their abilities easily until the Rubber Chicken grabs two lampposts to act as a living slingshot. Darkwing taunts Cement Head into coming after him until the Rubber Chicken's elastic energy becomes greater than Cement Head's strength. Cement Head gets slung far away and the two heroes compliment each other on a job well done. Mutantcy on the Bouncy

After Mondo steals his mask, Darkwing hatches a plan to get it back by targeting his opponent's ego. He, Launchpad, and Gosalyn go to City Hall to give an interview. Darkwing has fetched himself another mask and pretends that to be his real one, claiming that Mondo only stole his auxiliary mask and that he won't get the real one before Darkwing gets him. As predicted, Mondo watches the interview and enraged goes to City Hall to get the mask. He swings onto the scene with a rope attached to the roof of City Hall and snatches the other mask, but Darkwing counted on this. There's another mask under the one Mondo stole, which he claims to be his auxiliary auxiliary mask. Mondo returns to get the third mask by simply fighting Darkwing and Launchpad for it. Gosalyn makes use of the diversion to break into Mondo's van and retrieve all the masks he has stolen during his career. Mondo comes after her, but Darkwing comes after him, allowing Gosalyn to escape to the Thunderquack parked right next to City Hall. She and Launchpad return the masks to their rightful owners, then urge them to go help Darkwing before it is too late. They do so and their forces combined put an end to Mondo's mask-stealing career. Mondo: The Mad Mask Misappropriator

Retrieved from "https://darkwingduck.fandom.com/wiki/St._Canard_City_Hall?oldid=17073"
Community content is available under CC-BY-SA unless otherwise noted.