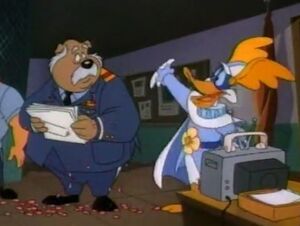 The St. Canard Chief of Police is a high ranking official at the police department of St. Canard.

Presumably a long-serving police agent, the Chief of Police has made the necessary promotions to become the department's contact person. He is either a colleague of or the predecessor to the other chief.

The St. Canard Chief of Police is a good soul, but a little too trusting.

The chief is a rotund, dognose-like dog with medium beige skin. He has white sideburns and a mustache, but otherwise is bald. His preferred attire for work is his uniform.

It's another day on the job when Darkwing Duck comes flouncing into the police station. He addresses the Chief of Police with an offer of two weeks vacation while St. Canard's safety will be his responsiblity as part of his program to improve his image. The Chief of Police expresses doubt Darkwing can do it alone, but Darkwing convinces him with positive-sounding words. Swayed, the chief hastily fetches his fishing gear, thanking the vigilante and complimenting him on his new hat in the process. A day or two later, he and the rest of the force are called back by the mayor because Negaduck has set all the criminals Darkwing had rounded up free. Let's Get Respectable The Chief of Police once more gets to deal with Darkwing when D-2000 wants the crimefighter dead. Being a supercomputer hooked up to multiple databases, she adjusts Darkwing's files wherever she can to make him look bad. One of her targets is the police computer, which she has issue a warrant for an arrest on charges of crimes of the heart. The Chief of Police sets out to personally bring Darkwing in, but is held up by other people also coming after the caped crusader for reasons of bills and overdue videotapes. As they argue, Darkwing makes a run for it and is accidentally saved from the mini-mob when the D-2000 buries them in waffles. Star Crossed Circuits

Retrieved from "https://darkwingduck.fandom.com/wiki/St._Canard_Chief_of_Police_(cartoon)?oldid=21795"
Community content is available under CC-BY-SA unless otherwise noted.