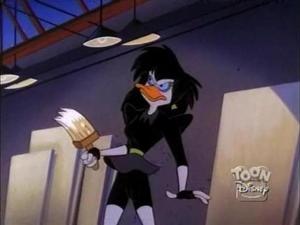 Splatter Phoenix, born Melody Amber Phoenix, is one of the numerous citizens of St. Canard who believes crime pays. As an artist, she is pompous and arrogant, defining herself as a "daringly innovative pseudo-anti-neo-postmodern deconstructionist", but she is not without talent. Her works continue to be rejected, though, because they are too far removed from convention. On one hand, this leaves Splatter Phoenix without money to continue her passion. On the other, she is a painted being herself and might very well have reason to be insulted when her views are turned down. To deal with her predicament, she created herself paint supplies with reality-warping properties. They allow her to enter paintings, animate them, paint wholly new structures and creatures to help her, and even repaint existing structures and people to suit her needs. Simply put, if it has a visual component, she is able to create or alter it as she pleases.

She was voiced by Dani Staahl in "A Brush with Oblivion" and by Andrea Martin in "Paint Misbehavin'".

It is unknown how Splatter Phoenix came to be. After her death and the revelation she is a painting herself, Launchpad wonders if she had created herself or if some "greater being" did, going as far as to ask himself if perhaps the entire world is but a painting. Paint Misbehavin' On the other hand, she has a civilian name, Melody Amber Phoenix, which suggests she is a regular person, possibly a mutant. Top Secret Files: Splatter Phoenix Regardless, no one but Splatter Phoenix has to fear turpentine, setting her apart still. Given her condition, it is possible she is aware of the fourth wall, but evidence is not conclusive. Paint Misbehavin' This trait would only be shared with the 3-D Man.

Splatter Phoenix tried to make it as an artist at first, but found her work sent back by the critics for being too experimental. This in itself she could deal with, but not the resulting unsellability of her work and the dwindling of her financial means. Unwilling to let her talents go wasted and having a knack for chemistry and physics, she created herself brushes and paint that allow her to use reality as her canvas in any way she can imagine. These she has since put to use stealing works of art to sell on the black market for the needed cash. A Brush with Oblivion Thinking highly of her own art, she also uses her powers to redefine and redesign any object of artistic expression she comes across to her own standards. Paint Misbehavin'

To put it bluntly, Splatter Phoenix is full of herself, vain, pompous, and contemptuous. It isn't enough for her to know she's good; she needs to know others are far below her to the point that whatever they say doesn't matter because they have no right of speaking in the first place. Words intended to demean such as "bourgeois", "masses", and "plebian" regularly make the rounds in her vocabulary. A Brush with Oblivion Splatter Phoenix does not consider herself a genre artist so much as one of the rare artists who has the right tastes and views. She does not place the works of others within context, but rather judges them to her own standards regardless of the historical developments involved. It is this disrespect that makes it easy for her to do with other's works as she pleases, because any damage won't be a loss. Paint Misbehavin'

Her deepest loathing goes to cartoon gag illustrations A Brush with Oblivion and comic books. Paint Misbehavin' The former she sometimes draws herself to get out of a tough situation, but with a strong sense of self-pity and anger if there's anyone to blame for her downfall. A Brush with Oblivion The latter she simply detests, considering them the antithesis of all she stands for. She refuses to have anything to do with them and is solely interested in seeing that market destroyed, although as with the cartoon gags, she did once draw herself a supervillain, Sir Real Man, to get her out of a tight spot. Paint Misbehavin'

As a tall, lanky duck with thick black hair, Splatter Phoenix stands out in a crowd even though she's not the kind of villain to dress up. The impression is made stronger by her way of moving, which is exaggerated and erratic and therefore emphasizes her spindly build.

In desperate need for the finances to continue her artistic pursuits, Splatter Phoenix opts to use her reality-altering paint supplies to rob the St. Canard Museum of some of its collection. For this purpose, she makes her base of operations within The Persistence of Memory. But her plans hit a snag when she is spotted moving around in the landscape of a painting by Honker Muddlefoot, who gets Darkwing Duck, Launchpad, and Gosalyn involved. Splatter Phoenix can handle herself against the latter three, but Honker proves to be a problem. Inspired by her fence, Splatter Phoenix steals the mouth of the Mona Lisa to get ransom for, but the mouth teams up with Honker to defeat her through the use of her own brushes. They hand her over to Darkwing Duck to see to prison. A Brush with Oblivion Some time later, Splatter Phoenix is loose again and improves the abilities of her paint supplies. She intends to use her new power to improve the art in St. Canard to her own views and take whatever she wants as her payment. Her first target is an auction, which she attacks with various creatures she paints into existence on the spot. She chases everyone out, redraws the paintings for sale, but fails to get any loot. Her next target, the Last National Bank, gets an impromptu redesign and this time she does leave with two bags of money. Splatter Phoenix continues with billboards and other public displays of art until she spots a comic book convention. Grossed out, she sets her sight on the money needed to fund the convention. Unfortunately for her, her adversaries of old are in attendance at the time and go after her. Her brush is stolen and retrieved multiple times before finally she just tries to escape. Gosalyn, in the guise of Quiverwing Quack, and Darkwing Duck stop her, accidentally spilling turpentine on her. Splatter Phoenix dissolves into a puddle of paint, taking solace in knowing her art will become more valuable with her passing. Paint Misbehavin' 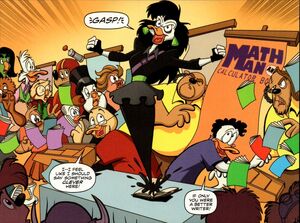 A comic book artist is asked by a fan to draw Splatter Phoenix, which he does using a new supply of ink provided to him by a mysterious benefactor. Splatter Phoenix rises from the drawing, and upon seeing that she's at a comic book convention begins wreaking havoc. Darkwing and Honker spot her and chase her into several comic books, along the way finding out that she is bound by the logic of the comic worlds they go into. They eventually manage to put her in an ad for Mostess™ Veggie Pies and then closing the comic while she's distracted eating the snacks. St. Canard Comic Expo Fest-O-Rama

Retrieved from "https://darkwingduck.fandom.com/wiki/Splatter_Phoenix?oldid=24746"
Community content is available under CC-BY-SA unless otherwise noted.