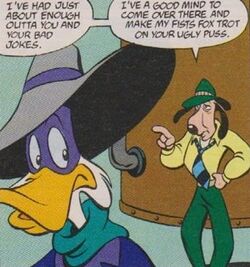 As the most honest member of the Suits, Spade is not an easy teammate, but he is a trustworthy one. He is loyal to Pokerface and knows a good insult or two.

Spade is one of the four people brought together by Pokerface to form his gang. If his words don't cut it—and they rarely don't cut—it's his fists that do the talking. He has the unusual ability that his presence make sound effects become descriptive. He and the others operate from Pokerface's office in One Chump Plaza Casino.

Spade doesn't pull his puncheswhether verbally or physically. If he's got an opinion, it'll come out without filter.

Spade is a dog standing at medium height. He's got long black ears and wears a green suit without jacket but with hat.

The Suits assist Pokerface in a scheme to poison the water supply for One Chump Plaza Casino with gambleholic toxin to make the patrons spend all they have. Darkwing Duck picks up their trail when the kill the city controller and crashes Pokerface's office. The four beat and tie him and Launchpad up, then leave with Pokerface to the water tank on the roof. Darkwing won't stay put, though, and comes after them. Because Darkwing himself has fallen victim to the gambleholic toxin, Launchpad has to bet him he can't defeat them to make sure he has a chance. Spade is the hero's final opponent and the one who infuriates him the most. The Suit insults Darkwing's jokes and fashion choices, which earns him the worst Darkwing has to offer his enemies. "Feeling Flushed"

Retrieved from "https://darkwingduck.fandom.com/wiki/Spade?oldid=20662"
Community content is available under CC-BY-SA unless otherwise noted.