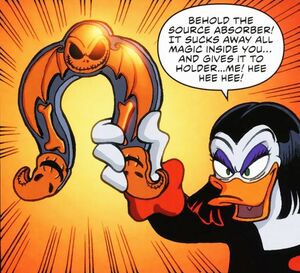 The source absorber is a horseshoe-shaped artifact that drains a target of its energy to give to its holder or another target. It works with any kind of energy, including magical energy and emotional energy. The sole condition is that the holder does not lose its grip, because then the energy transfer becomes destabilized. 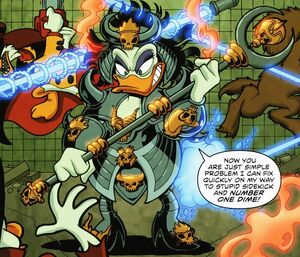 The source absorber is or was part of the assortment of Hot Topic, where Magica De Spell purchased it. She only got to use it for a short time before it was taken from her and the item presumably has since been in the possession of Morgana Macawber.

The source absorber has a bit of an odd name. It absorbs alright, but what the source spoken of is is unclear. It certainly doesn't absorb sources, but resources, specifically any form of energy. Depending on the wish of the user, it either channels energy taken to them or at a target. Because the source absorber does not process the energy, it can be put to use as a direct weapon if the target is sensitive to the kind of energy channeled. Crisis on Infinite Darkwings, Part 4 It appears that if the user takes energy for themself, the source absorber generates a matching armor and staff for them. Crisis on Infinite Darkwings, Part 3

Magica De Spell buys herself the source absorber in order to have a weapon in case any of the "Darkwings" she'll abduct have magic of their own. None of them do, but the item proves useful when the heroes storm her base of operations. With them is Morgana Macawber, whose magical power does a number on Magica's. With the source absorber, Magica turns the tables, taking Morgana's power for herself and receiving some fancy armor in the process. Delighted with her new strength, Magica enacts a mind wipe spell on Morgana that takes some minutes to be completed. Crisis on Infinite Darkwings, Part 3 This gives Quiverwing Duck the time to shoot a boomerang arrow at her, which swipes the source absorber right out of her hands. Without it, Magica's collected power turns on her and she loses not only Morgana's magic but also her control over the "Darkwings". Quiverwing keeps the source absorber with him through the next few events until the "Darkwings" have to take on Paddywhack armed with the tronsplitter. Gosalyn shows herself in the chaos, triggering a wave of parental love from all "Darkwings" present. Quiverwing hands Morgana the source absorber for her to collect the love and channel a concentrated beam of positive feelings to Paddywhack. It is more than enough to force him to return to his box. Crisis on Infinite Darkwings, Part 4

Retrieved from "https://darkwingduck.fandom.com/wiki/Source_absorber?oldid=19565"
Community content is available under CC-BY-SA unless otherwise noted.