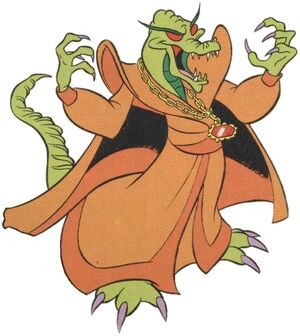 Solego, also known as the Chaos God, was born a mortal on the island of Rakkinroon many centuries ago, but he's not been one for almost as long. Upon finding the key to eternal life, his powers became unmatched and he ascended to the level of demons. In this state, he sought to destroy and conquer Rakkinroon and from there move on to the rest of the world. It did not get that far due to the cunning of D'Shane, who imprisoned him in the Medallion of the Chaos God. Solego did not escape until the 20th Century, at which time he caused trouble in Calisota. It was due to his own melodramatic arrogance and the luck of Darkwing Duck that he was imprisoned once more. Since then, he's been stashed away in the Money Bin of Scrooge McDuck.

Solego lived centuries ago on Rakkinroon. He was a sorcerer that rapidly grew stronger until the day he made himself immortal and became something far worse. The people of the island came to refer to him as the Chaos God in the belief that his name would cause them bad luck. With nearly unstoppable magic powers that was eventually imprisoned within two pieces of mystic jewelry. Solego eventually possesses the Gizmosuit and used it to fly to St. Canard, where he finally succeeded in freeing himself. During the final battle with Darkwing, one of his magic blasts bounced off a satellite dish, striking the jewel and splitting it, re imprisoning him. The pieces were sealed within a safe, which was then buried at the bottom of Scrooge McDuck's Money Bin.

Solego may not have invented the title Chaos God, but he lives it still.

In his true form, Solego is a reptilian creature with green skin and glowing red eyes. He wears an orange tunic with red lining that covers nearly his whole body. Ever since his defeat, he also carries the Medallion of the Chaos God around his neck. In his subdued form, he is the medallion, with his mind inhabiting the crystal and his magic the frame.

Upon acquiring immortality, Solego goes on a rampage on Rakkinroon to conquer it. All fail to stop him until D'Shane gives it a try. He tricks Solego into firing at his highly polished shield so that the beam returns to the sender. This way, Solego destroys his body. Using the Medallion of the Chaos God he created earlier, D'Shane traps Solego's magic in the frame and his mind in the crystal and stores them separate from eachother within a jade block in the Temple of Duumingluum. Centuries pass, during which the civilization disappears from Rakkinroon. Around 1940, the Potsherds bring an excavation to Rakkinroon and rediscover the Temple of Duumingluum. Aware of some of the legends regarding the medallion pieces they find there, they still remove them for research, mindful to never touch them directly. The medallion pieces are packed with a first shipment of artifacts to the museum they are associated with, but an attack by air pirates causes both pieces to escape their container. The medallion gets lost in the sea, while the crystal comes in contact with Rebecca Cunningham. Solego possesses her immediately, but he's still weak, so Rebecca is ultimately able to resist him. The crystal is thrown into the sea, where it rests for half a century until it resurfaces in the stomach of a fish. Solego possesses a hapless fisherman and has him take the crystal to a museum he senses the medallion to be nowadays. The crystal is left on the director's desk, but that night Fat Cat's gang breaks in to get the legndary medallion. The Rescue Rangers are present to stop themand Solego in turn gets to possess Fat Cat, Gadget, Dale, and Fat Cat again, but ultimately is unable to bring his parts back together. The Rescue Rangers send the pieces out in the world separately and the crystal ends up in Spoonerville, where it possesses the new car of Peter Pete. Solego discovers that he likes machines a lot better as hosts than people due to their lack of an own will. In need of the ignition key, he takes Pete and his neighbor Goofy hostage upon hearing through the TV that the medallion is in the possession of Scrooge McDuck in Duckburg. With luck, the two manage to get the car to crash and leave it be. Solego uses the car's build-in phone to contact Spoonerville Towin' Service and get a ride to Scrooge's Money Bin. Once there, he hypnotizes Fenton Crackshell into picking him up, who in response utters his catchphrase. The Gizmosuit assembles around him and Solego possesses that instead, kicking out Fenton. He breaks into the Money Bin, but finds that the medallion isn't kept there. He leaves and follows his senses to McDuck's Jewelers in St. Canard. He gets the medallion with no resistance from the store keeper, but as he's about to remake himself, Darkwing Duck shows up. The crimefighter is no match for the Gizmosuit and Solego alllows him, Launchpad, and Fenton to be witness to his rebirth. Immediately, he creates an army out of all the inanimate objects in St. Canard and sics it on the population. Fenton runs off to return as Gizmoduck now that Solego has ditched the Gizmosuit, and saves Darkwing from two lion statues brought to life. Solego doesn't even break a sweat in turning Gizmoduck to ash and Launchpad into chopped liver. Darkwing, now alone, challenges Solego. Solego accepts, hoping to find someone as worthy as D'Shane had proven himself to be. He's disappointed when all Darkwing does is run, duck, and hide and resolves to end him. He fires a blast at the crimefighter, but he hides behind a satellite dish. The ray returns to Solego, destroying his body and returning him to the state of disassembled jewelry. This automatically undoes everything he directly caused with his magic. Darkwing collects the medallion pieces and takes them to the Money Bin, where he gives them to Bisk Potsherd. Bisk places the pieces back in the jade block and gives the block to Scrooge McDuck to bury at the bottom of the Money Bin where no one will ever find it. "The Legend of the Chaos God"

Retrieved from "https://darkwingduck.fandom.com/wiki/Solego?oldid=23909"
Community content is available under CC-BY-SA unless otherwise noted.