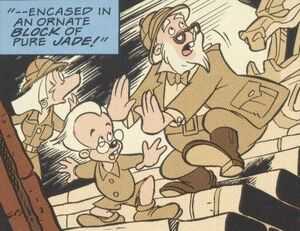 Professor Simon Potsherd is an archeologist who was active during the first half of the 20th century. He is the husband of another archeologist and the father of Bisk. He and his family are, without meaning to, the ones responsible for the second chance at life acquired by Solego, the Chaos God, but his son helped defeat him decades later when old age had probably already caught up with him.

Potsherd presumably met his wife some time between 1920 and 1930, as Bisk seems to be ten years old around 1940. The excavation at Rakkinroon appears to be primarily his project. Because he probably was around 40 in 1940, odds are he died prior to 1990. Given that he offered to buy the Medallion of the Chaos God from Scrooge McDuck, it appears he is wealthy.

Much like his wife, Potsherd puts research before caution. He doesn't take risks that are unnecessary, but that leaves a whole lot of necessary — as far as his archeological goals are concerned — risks to be taken. Still, he takes his responsibility when his actions take a bad turn. Potsherd is emotionally dedicated to his work and gets upset when he loses possession of his artifacts.

Potsherd may be a dog. He's corpulent, wears glasses, and has grey hair. He is medium-to-tall of height.

Potsherd has arranged an excavation worth of months of work on the island of Rakkinroon in the company of his wife and his son. One day they discover and enter the Temple of Duumingluum, there they find a peculiar altar that, as they suspect, might be related to the Chaos God, Solego. They obtain an intriguing medallion and a crystal embed in a block of jade atop the altar. Potsherd attaches a chain to the crystal for safe handling and packages the two artifacts to send to the museum with the first shipment from Rakkinroon. On the day of the transport, air pirates attack Rakkinroon to obtain the shipment of archeological treasures, but the people of Higher for Hire stop them. Still, the battle causes the medallion and crystal to become lost, which causes Potsherd distress. He is forced to set up a museum tour of his research without the best pieces until 1962, when Scrooge McDuck retrieves the medallion off the coast of Wauie-Zauie. Potsherd contacts him to buy the artifact, but Scrooge refuses to sell it. He does, however, offer to lend it to the museum tour, which Potsherd eagerly accepts as the next best thing. "The Legend of the Chaos God"

Retrieved from "https://darkwingduck.fandom.com/wiki/Simon_Potsherd?oldid=25548"
Community content is available under CC-BY-SA unless otherwise noted.