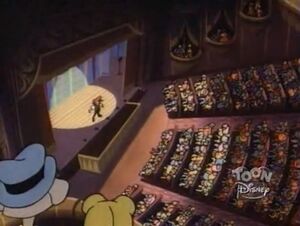 The Shubird Theater is one of the various stage theaters in St. Canard.

The Shubird Theater needs to hire better staff and actors.

A poor performance of Hamlet is disrupted by Quackerjack and Megavolt, who want to act out their own play while robbing the audience. Because all of the audience has been hit by the relaxitron, they hand over their valuables without resistance. Darkwing Duck is on their trail, though, and discovers them at the theater mid-stick-up. He and Launchpad try to stop them, but find no help from the audience. An outburst of anger from Darkwing has the decor crash down on top of him and the villains escape in Megavolt's car. Stressed to Kill

Retrieved from "https://darkwingduck.fandom.com/wiki/Shubird_Theater?oldid=15448"
Community content is available under CC-BY-SA unless otherwise noted.