Scrooge McDuck is known to be the world's richest duck. He is a former employer to Launchpad McQuack and current employer to Fenton Crackshell, also known as Gizmoduck. During the course of DuckTales Scrooge was the legal guardian of his grandnephews Huey, Dewey and Louie. He was voiced by the late Alan Young.

He appeared near the end of "The Duck Knight Returns" comic book story arc as he was given ownership of The Quackwerks Building after Darkwing defeated Taurus Bulba. Scrooge appointed Launchpad as the CEO of the Quackwerks Bulding.

He is also in the Disney XD ongoing 2017 remake of Ducktales, as one of the seven main characters. This show references Darkwing Duck multiple times, most notably in a season 1 episode titled "Beware the B.U.D.D.Y System!" He is now voiced by David Tennant.

Scrooge is iconic enough to Duckburg that his face adorns the "Now Leaving Duckburg" billboards. "Tiff of the Titans"

"The Legend of the Chaos God" 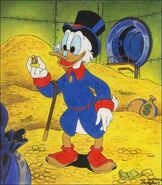 Scrooge in the original DuckTales series.

Scrooge in the reboot.
Add a photo to this gallery
Retrieved from "https://darkwingduck.fandom.com/wiki/Scrooge_McDuck?oldid=28552"
Community content is available under CC-BY-SA unless otherwise noted.