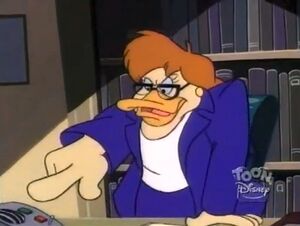 The school counselor is an unpleasant woman whose interest lies with keeping the children at her school in line and nothing more or else than that. She is overwhelmingly authorative even to the parents she relays her ideas of the childrens' behaviors too and does not tolerate rebuttal. As an organized person, she has her evidence ready when the parents walk in, leaving them as little room as possible to reject proposals for stricter parenting.

She is voiced by Candi Milo.

The school counselor is employed at the school Gosalyn Mallard, Honker Muddlefoot, and their friends attend, and she seems to have been doing her work for a while already.

The school counselor stretches the purpose of her job far into the realm of parenting regardless whether parent or child even ask for it. She has her ideas of how a child should be and if they fail to conform, even in harmless ways, she'll make a case out of them. Parents that come in for a talk are there to later put her advice into practice, not to make a difference in her concerns. Her opinion bulldozes right over theirs if need be.

The counselor is a duck with sandy feathers and long brown hair. She's of medium height and sturdy of size. She wears glassed and dresses in business suits.

The counselor invites Drake Mallard to her office to talk about Gosalyn, who has been telling her classmates about the chainsaw-wielding zombie she saw jump off the movie screen. The counselor believes that Gosalyn cannot tell fiction from reality because she watches too many gory movies. Drake tries to argue his daughter has an active imagination, but that she knows the difference between a movie and real-life. Gosalyn, however, maintains she saw a zombie step out of the movie. Embarrassed, Drake promises the counselor that he'll supervise what she watches from now on. "Film Flam"