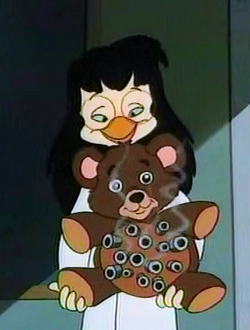 Imagine a person whose destructive creativity is as high as their moral standards are low and who has the body count going for them to be among St. Canard's worst yet is a dependable and trusted member of the good guy team. Said imagination's name is Sara Bellum. Dr. Bellum is the head of SHUSH's research division and somehow both profoundly intelligent and spectacularly stupid at the same time. Her goal is to win the Nobel Prize with the inventions she creates for SHUSH, which have included the norma ray, the time machine, and the Svaco-650 pie gun, as well as killer teddy bears.

She shows a cheery disregard for any sort of professional ethics, mentioning off-handedly in both "Heavy Mental" and "Disguise the Limit" that her experiments tend to kill the test subjects. In "Heavy Mental", the risk of harm was so big that she wanted "vic- er, volunteers" that weren't covered by SHUSH's medical insurance. When unable to tell the difference between Darkwing and a disguised Negaduck in "Just Us Justice Ducks", she happily announced that she'd just kill them both to save time, and begins to break out a weapon to do so.

She is voiced by Jodi Carlisle.

As one of SHUSH's foremost scientific minds, Bellum is in an odd position where she's allowed to make sacrifices - that is, other agents - to get her results. Putting others in deadly situations is pretty much just another Monday for her, but she does want her inventions to eventually be used for the greater good.

Heavy Mental Hooter and Bellum have Darkwing deliver a cassette tape titled Greatest Polka Hits to SHUSH's garage hideout, which is the final part to get Bellum's time machine to work. Bellum notes the device hasn't been tested yet, so it might not work, but Darkwing is intrigued and hops in. He starts playing with the controls, accidentally sending himself back in time. Bellum is elated it works. Due to Darkwing's actions in the past, however, the timeline is changed so that Hooter and Bellum never worked for SHUSH but instead are garage keepers. When Darkwing returns, unaware of the changes, his comments confuse them, and when he starts pulling Bellum's hair to improve what he thinks is a disguise, Hooter attacks him. The confrontation is interrupted by the arrival of the King, a criminal that in the altered timeline came to rule St. Canard. While Darkwing hides, the King uses Cecile to break the windows of all the cars present and his men forcefully collect tax money from the two garage keepers, even though they already paid yesterday. Darkwing tries to help them, but almost gets killed before he realizes he has to go back in time once more to restore the present to its proper form. He succeeds. Paraducks Just Us Justice Ducks, Part 1 Disguise the Limit

Just Us Justice Ducks Part One

Bellum is taken prisoner by a humongous sapient carrot Bushroot has created. Darkwing and Launchpad come to her aid, but the situation escalates even further when the carrot attracts the world's biggest rabbit. The Duck Knight Returns, Part 1

Bellum is taken prisoner by a humongous sapient carrot Bushroot has created. Darkwing and Launchpad come to her aid, but the situation escalates even further when the carrot attracts the world's biggest rabbit. The Duck Knight Returns, Part 1

Retrieved from "https://darkwingduck.fandom.com/wiki/Sara_Bellum?oldid=21988"
Community content is available under CC-BY-SA unless otherwise noted.