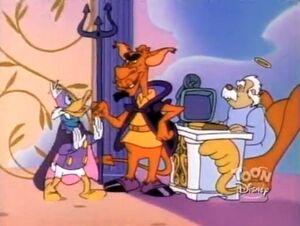 Saint Peter, Pete for friends, is the gatekeeper of Heaven. Any soul seeking entrance has to check their reservation with him. Even though they are competitors, he's on decent terms with Beelzebub.

He is voiced by Hal Smith.

Saint Peter has been doing his job for a very long time and still shows up at work with a smile. He's in charge of keeping the bad eggs out of Heaven and making sure those who've earned a seat on the clouds get what they deserve. Mostly this means he just has to look up reservations on his computer and let those already present through, but administration can go wrong and sometimes he needs to get more involved to bring a case to an end.

While he and Beelzebub are competitors, they serve the same role in the larger scheme of things, which is probably why they manage to get along and to agree to irresponsible decision-making processes like flipping a coin.

As a soft-spoken, polite, and sunny individual, Saint Peter is an ideal doorman. He may have a computer, but he also knows a thing or two about the travelers by head and he uses that knowledge to complement the files when those are lacking.

Saint Peter is a dog of seemingly medium size and sturdy build. He has white hair, thick eyebrows, a mustache, and a halo. He wears a simple light-blue tunic.

Saint Peter is pleasantly surprised to see Darkwing Duck come up the elevator. He welcomes him and goes through his computer for the crimefighter's reservation. "Darkwing Duck" doesn't result in any hits, so he tries "Drake Mallard". Darkwing, who doesn't realize he's dead yet, is confused the guy behind the desk knows his secret identity. Questions are postponed when Beelzebub arrives, having followed Darkwing from Hell. The two entities argue where Darkwing belongs and, unable to come to an agreement, Beelzebub proposes they flip a coin for "the dead guy". Upon hearing these words, Darkwing grabs the coin and demands to know who's dead. Saint Peter tells him it's him. Darkwing rejects that claim and heads back to Earth with the elevator, leaving the both of them behind. Then it turns out to be all a dream. "Dead Duck"