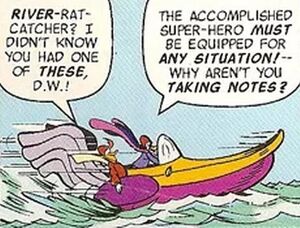 The River-Ratcatcher is an aquatic version of the Ratcatcher. Like the latter, it belongs to Darkwing Duck, but he rarely uses it.

The River-Ratcatcher is one of Darkwing's many gadgets to solve cases and go after criminals. It is a counterpart to the regular Ratcatcher to be used in liquid environments and therefore likely another Darkwing-custom invention by SHUSH. It is at least not an invention by Launchpad, because he did not know of the vehicle's existence prior to Darkwing utilizing it. If Darkwing has its controller with him, he can summon it from a distance.

Darkwing and Launchpad return to St. Canard to deal with Fluffy, but his flee powder is forcing out the last of the civilians, whose numbers block Audubon Bay Bridge. To get across Audubon Bay, Darkwing summons the River-Ratcatcher to their location. Anticipating an army of cats on the other side, he attaches a fishing net at the back of the vehicle. By the time the cats are in sight, the duo has caught plenty of fish to distract them with and move on safely. "Fluffy's Reign of Terror!"

Retrieved from "https://darkwingduck.fandom.com/wiki/River-Ratcatcher?oldid=17134"
Community content is available under CC-BY-SA unless otherwise noted.