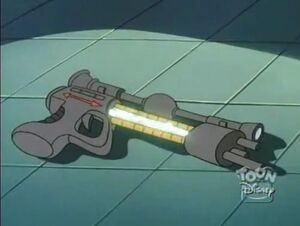 The retro-evolution gun, sometimes shortened to retro-gun, is a gun with the property that, when aimed at living creatures, it dives into the DNA of the target and latches onto ancestral traces. From there, it reconstructs the target into a version of themselves that resembles the ancestor species. The retro-evolution gun can go as far back as change someone into an amoeba and it comes with a reverse function. Heat is a byproduct of the gun's ray and can be used to safely warm up anything without living cells, such as food. The retor-evolution gun was created by Dr. Fossil to make dinosaurs the dominant species once more, but that plan was stopped by Darkwing Duck. The current whereabouts of the device are unknown.

Being an overzealous dinosaur enthusiast, Dr. Fossil creates the retro-evolution gun to turn people into dinosaurs. His first two projects are himself and the simple-minded janitor of the St. Canard Natural History Museum. Dr. Fossil renames him Stegmutt and makes him his assistant, tasking him with abducting several people to also be turned into dinosaurs. Dr. Fossil's larger scheme is recreating a few dinosaurs and then wiping out the rest of mankind with Cleanser's Comet. He gets to five unwilling mutants before Honker and Gosalyn find out about his scheme courtesy of the oblivious Stegmutt. The two children are set to be added to the collection as soon as the super-magnet to draw in the comet is secured. However, the children convince Stegmutt that Dr. Fossil has to be stopped and he frees them instead. They go up to the roof of the natural history museum, where Darkwing accidentally knocks the retro-evolution gun out of Stegmutt's hands and gets hit by the ricocheting blast. He becomes a huge theropod, which gives him an edge against Dr. Fossil strength-wise, but also makes him an easier target when the doctor grabs the retro-evolution gun and tries to further retro-evolve him into an amoeba. Honker, Gosalyn, and Stegmutt use the super-magnet to pull the gun out of Dr. Fossil's grip and the villain is defeated soon after. With the world saved, Stegmutt concedes it's time that all the involuntary mutants get changed back to their old selves. Darkwing demands to go first, justifying himself by claiming a hero has to safety test the maiden procedure. He's not incorrect, because the first shot further retro-evolves him into a prehistoric fish. Jurassic Jumble

Retrieved from "https://darkwingduck.fandom.com/wiki/Retro-evolution_gun?oldid=21747"
Community content is available under CC-BY-SA unless otherwise noted.