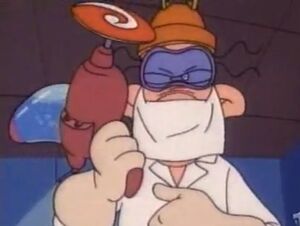 The relaxitron is a hypnotic device that blocks off any potential for stress the target holds, putting them in a perpetually relaxed state. It is an invention by Megavolt and Quackerjack.

During what might've been their first cooperation outside the Fearsome Five, Megavolt and Quackerjack combined their respective talents for psychology and electrical engineering to create the relaxitron. It is a hypnotic ray gun which one use is to make the target lose all propensity for stress. In their calm state, nothing but immediate comfort matters and thus they become vulnerable. There is a blue liquid held in a container atop the relaxitron, but its purpose is unclear. It's not fuel, because Megavolt powers the device. It is possible the relaxitron did not come with a reverse function; the only confirmed way to cure its victims is a strong jolt of electricity. The relaxitron was destroyed when Megavolt overcharged himself while holding it.

Upon completing the relaxitron, Megavolt and Quackerjack set up a stress-free clinic and slowly work through the entire population of St. Canard that inevitably drops by, especially when so many others already are relaxed. When they believe they've had enough satisfied customers, they start committing robberies and other illegal activities with an emphasis on having fun, as they don't have to worry about anyone trying to stop them. Darkwing Duck is one of the last to have escaped the relaxitron. He finds the villains in the process of robbing the audience at the Shubird Theater and confronts them, but is put off by the audience's thorough indifference to the heist. Getting gradually more agitated, the villains make fun of his stress and get away by provoking Darkwing into self-sabotage. Darkwing consequently believes he has a stress problem and resolves to work himself out of it, eventually giving the stress-free clinic a try. He doesn't realize anything is wrong until he has the relaxitron aimed at him and gets zapped. When next Megavolt and Quackerjack commit a crime, Launchpad and Gosalyn have to come along or Darkwing won't do anything. The villains are unimpressed and prepare to hit the rest of the crimefighting team with the relaxitron's ray too, but Megavolt's battery is low. They leave so he can recharge on a utility pole, but Megavolt accidentally shocks himself while still having the relaxitron with him. The device gets fried and falls a long way down to boot. Quackerjack isn't amused, but there's soon other matters to worry about. Stressed to Kill

Retrieved from "https://darkwingduck.fandom.com/wiki/Relaxitron?oldid=15821"
Community content is available under CC-BY-SA unless otherwise noted.