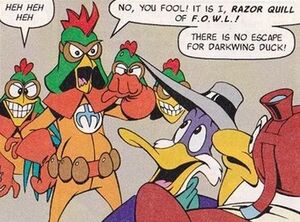 Razor Quill is an agent of F.O.W.L. with his own team of henchmen.

Razor Quill has claimed to be married and a father to three children, but he might have been lying considering he was begging for his life at that time.

Razor Quill is a chicken with a blue tail, pointy comb, and a jagged lower jaw. His uniform consists of an orange jumpsuit with a green chicken claw logo on the chest, brown boots below the knee, red gloves and shoulder cloak, a brown and red utility belt, and a green hood that covers his face except for the beak, eyes, and comb. The hood is held in place by brown goggles. His troops wear the same outfit as he does, with the exception that their goggles are round-eyed and his has a built-in frown for a more menacing look. Their combs also are rounded and lower jaws smooth, unlike his.