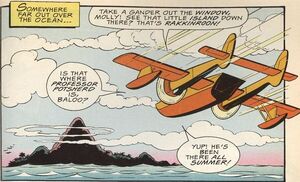 Rakkinroon is a tropical island that hasn't been inhabited in centuries but once housed a powerful civilization. It is the birthplace of the demon Solego and the wizard, D'Shane, who defeated him. It appears their battle has something to do with the disappearance of their people from the island, but the details are lost in time.

Rakkinroon has a tropical climate and might be located nearby Wauie-Zauie. It is a large island fit to house multiple cities, but hasn't been populated for centuries since the original inhabitants left. Why they left is a mystery lost in time. It's likely that Solego's rampage has something to do with it, but people were still around by the time he was imprisoned and therefore no longer a direct threat. It may be they left to be as far away from his prison as possible should he escape or that his rampage ruined the island's resources. Alternatively, something unrelated to the Chaos God motivated people to leave.

In times past, Rakkinroon finds itself at the mercy of an immortal wizard named Solego. As he goes from city to city to destroy and conquer, he earns the title Chaos God as the people of the island come to associate his name with bad luck. All attempts to stop him fail, until only one boy with a plan is left. His name is D'Shane and he has created the Medallion of the Chaos God to imprison Solego's mind and magic after he tricks the god into destroying his own body. The latter he accomplishes with a highly polished shield with which he reflects Solego's magic back to him. The medallion's halves, a crystal and a frame, are placed in a jade block, which in turn is placed inside the Temple of Duumingluum. Though the threat of the Chaos God is terminated, Rakkinroon soon becomes uninhabited, leaving the civilization's artifacts to be retrieved only around 1940 during a summer excavation organized by the Potsherds. They uncover the then-legendary Temple of Duumingluum and, while mindful of the danger spoken of in the legends, take the medallion's halves away for research and transport to the museum. The halves are part of the first shipment of artifacts to the museum. The Potsherds have an agreement with Rebecca Cunningham's Higher for Hire transport company to provide them with monthly supplies and pick up the shipments so the museum can collect them at Cape Suzette. That month, Don Karnage's air pirates attack Rakkinroon to steal the shipment. The Sea Duck arrives in time to stop them, but during the fight a box breaks open and its contents, the medallion pieces, fall out. The frame lands in the sea and drifts off to Wauie-Zauie, while the crystal ends up in an empty sugar barrel. The disturbance goes unnoticed as the Potsherds are just happy that the artifacts are saved. The Legend of the Chaos God

Retrieved from "https://darkwingduck.fandom.com/wiki/Rakkinroon?oldid=24310"
Community content is available under CC-BY-SA unless otherwise noted.