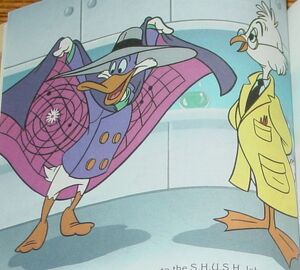 The scientist concerns himself with any sort of invention that might benefit SHUSH and its agents. In this role, he has developed at least one device for Darkwing too: a cape capable of tracking robot puppies and protecting him from their silly signal.

A by-the-book person, but the scientist is easily caught offguard by anyone with a more impulsive personality.

The scientist is a tall, lanky bird with white feathers and a small beak. He wears a yellow labcoat, black tie, round glasses, and no shoes.

The scientist creates a radar cape for Darkwing Duck to aid him in his investigation as to what is happening with SHUSH's agents. Darkwing runs off before the scientist can fully explain the gadget's workings. "The Silly Canine Caper"

Retrieved from "https://darkwingduck.fandom.com/wiki/Radar_cape_scientist?oldid=24779"
Community content is available under CC-BY-SA unless otherwise noted.